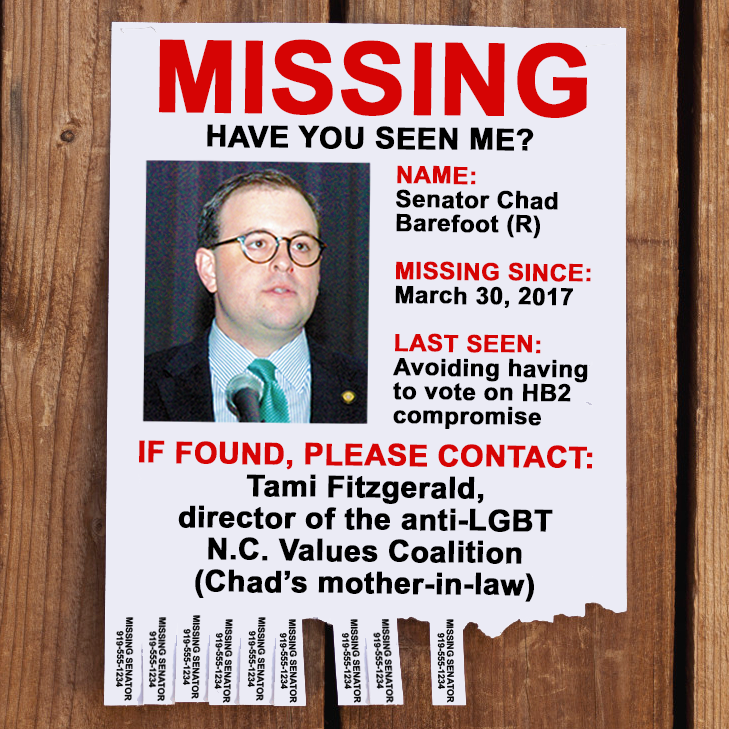 RALEIGH — During all the commotion over Thursday’s vote to repeal parts of HB2 (while leaving other parts in place), one conspicuous absence went largely unnoticed: Sen. Chad Barefoot of Wake County, the son-in-law of N.C. Values Coalition director Tami Fitzgerald.

Fitzgerald and her anti-LGBT lobbying group were instrumental in pushing Republicans to pass HB2 in the first place, and the NC Values Coalition opposed Thursday’s compromise legislation because it repealed parts of the discriminatory law.

Although Sen. Barefoot supported HB2 when it first passed in 2016, voters in the 919 area code (including Barefoot’s district in Wake County) overwhelmingly oppose HB2. So why did Sen. Barefoot conveniently avoid having to vote on the HB2 compromise?

”Wake County voters overwhelmingly wanted HB2 repealed, and they deserve to know where their state senators stand on the issue,” said Gerrick Brenner, executive director of Progress NC Action. “On such an important decision, voters deserve to know where Sen. Barefoot actually was and what he was doing during that vote. What was more important than showing up to vote on the HB2 repeal? Did Chad Barefoot simply go missing in order to avoid voting against either his district or his mother-in-law? Voters deserve to know.”