From Indy Week: What’s Behind the Legislature’s Plan to Overhaul the State Court System? 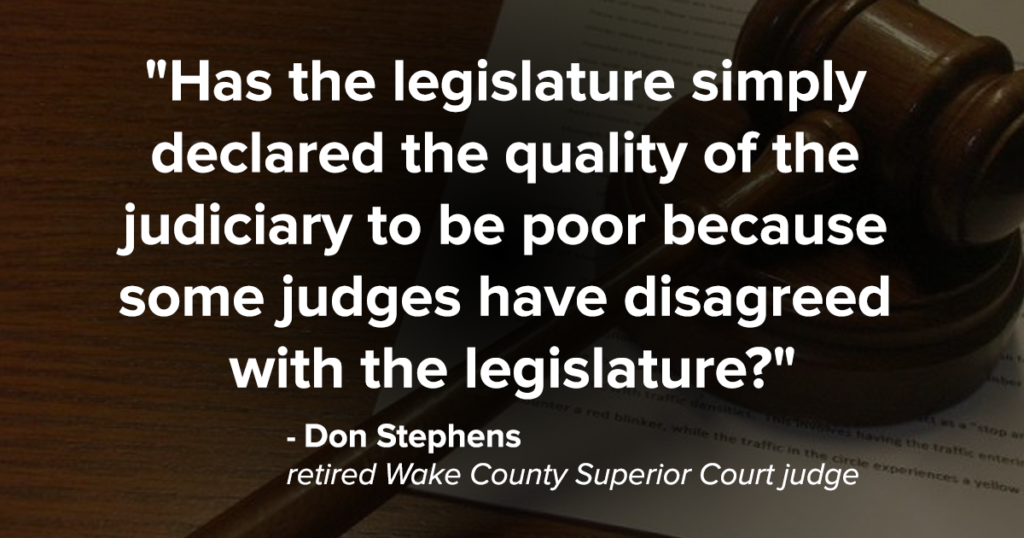 Republicans are seeking to rig the court system of North Carolina.  They do not like the decisions the courts have made to stop their attempts to suppress voters and racially gerrymander legislative districts.  Their solution?  Make the courts partisan, cancel a primary election, and try to do away with the public election of judges altogether. They want to appoint judges themselves who will be less likely to overturn the unconstitutional laws they continue to try to enact.  This removes checks and balances from our state government and goes against our constitution.  Republicans see no problem with that.

State Democrats and fair courts groups are sounding the alarm over a string of recent proposals from the GOP-led General Assembly that would dramatically reshape the judiciary—a brazen attempt, they say, to politicize the judicial branch and change the makeup of the courts in Republicans’ favor.

The reconfiguration coincides with a series of legislative setbacks for Republicans at the hands of the courts. Advocacy groups say that’s hardly a coincidence.

“This legislature is unhappy with the system of checks and balances that our government has created, and they’re wanting to do something to change the checks and balances on our system,” says Melissa Price Kromm, the director of North Carolina Voters for Clean Elections. “It’s alarming.”

The saga dates back to 2013, when the legislature repealed public financing for judicial races. Since then, what fair courts advocates call an attack on the judiciary has only accelerated. Several bills have been introduced that could significantly change the makeup of the courts, and tension between Democrats and Republicans, as well as public pressure, is mounting.

Last week, the North Carolina Democratic Party sued the legislature over a recently passed law that, among other things, eliminates judicial primaries—a move that opponents said effectively strips North Carolinians of the right to vote.

“Legislative Republicans are rigging the system, not creating a better system of selecting judges,” NCDP chairman Wayne Goodwin said in a statement announcing the lawsuit. “North Carolinians have a right to make an informed decision about who they want as their judicial nominee. This move unjustly eliminates that right and should be immediately struck down.”

The day after the NCDP filed suit, Democrats walked out of a Senate Judiciary Committee hearing in protest after Don Stephens, a retired Wake County Superior Court judge and representative of Governor Cooper, was barred from testifying. During the hearing, lawmakers were debating changing the judge-selection process from an election, which is how they are currently chosen, to an appointment, which opponents say is a transparent attempt by the GOP to stack the bench with judges who will rule in their favor. (Over the past few years, the courts—federal courts, predominantly—have consistently gotten in the way of Republican ambitions, overruling more than a dozen laws passed by the GOP.)

Stephens was slated to talk about Republicans’ tinkering with the judiciary but was prevented from doing so by Senator Dan Bishop, the committee’s chairman, who argued that Stephens couldn’t speak because he isn’t employed by Governor Cooper’s office.

In response, the three Democrats on the nineteen-member committee—Senators Jay Chaudhuri of Raleigh, Floyd McKissick of Durham, and Joel Ford of Charlotte—walked out of the room in silent protest. The hearing continued without them, and Republicans proceeded to introduce a new set of proposed election maps for judges and district attorneys—an issue that the Democratic lawmakers hadn’t anticipated because it was not on the meeting’s public agenda. Bishop said the new maps were drawn to address possible problems with a set of maps proposed by House Republicans that could lead to legal challenges.

Stephens summarily shared his prepared testimony with The News & Observer: “Has the legislature simply declared the quality of the judiciary to be poor because some judges have disagreed with the legislature in their decisions?” it reads. “The fact that we are having this conversation impugns the integrity of every sitting judge in North Carolina, be they Republican or Democrat.”

As we try to make sense of the latest partisan spat, let’s consider the context. The bill the Democrats sued the legislature over last week, the Electoral Freedom Act, is just one of a number of Republican proposals to significantly reshape the courts.

There’s also HB 717, a controversial judicial redistricting bill passed by the House that critics say would gerrymander the judicial districts (according to the coalition Fair Courts NC, the bill would pack nearly half of all African-American judges into districts with another incumbent); SB 698, which would slash all judges’ terms to two years, forcing them to be in a near-constant state of fundraising and campaigning (if passed, it would make North Carolina the only state in the nation with two-year terms for elected supreme and district court judges); and a yet-to-be-introduced proposal floating around the General Assembly that would eliminate the state’s judicial elections altogether, likely replacing them with a process that would allow politicians to pick their own umpires.

Taken together, critics say the spate of legislation is a naked attempt to bend the judiciary to the will of Republican lawmakers, who have in recent years been bruised by rejections from the courts, ranging from a state court rejecting the repeal of teacher tenure to voter ID and redistricting decisions at the federal level.

“I believe the legislature is looking at ways to change the makeup of the judiciary for partisan reasons and that’s dangerous public policy,” says Price Kromm. “The courts have overturned many laws that this legislature has passed, and you can tell that they’re upset about it and they want to make changes to the judiciary for those reasons.”