From The ABA Journal: The North Carolina legislature is attacking judges who rule against it 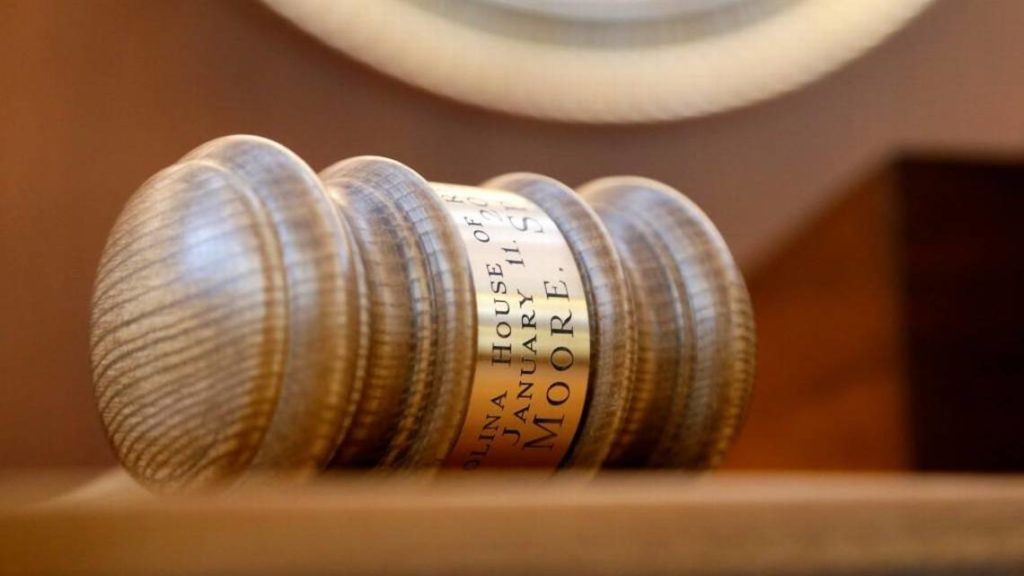 For a functional democracy, we must have an independent judiciary. Lawmakers in Raleigh have had their unconstitutional laws struck down by courts over and over again.  Their solution to this problem is not to stop passing unfair and unconstitutional laws.  Their solution is to take over the court and rig the system so they can pass their extreme agenda without interference.  Legal professionals continue to speak out against this undemocratic attack on our courts.

From The ABA Journal:

After voters elected Democratic Gov. Roy Cooper in November 2016, the Republican North Carolina General Assembly quickly passed laws that drastically limited the powers of the executive branch. The outgoing Republican governor signed the bills, which have been challenged in court, along with other laws passed since then.

As the courts have protected voting rights and required the legislature to fix unfair gerrymanders, legislators have lashed out at judges and passed bills giving them more control over courts.

Gov. Cooper challenged a law requiring Senate confirmation of his cabinet appointments under the state constitution. The governor argued that the legislature could only require “advice and consent” for constitutional officers, not cabinet secretaries.

Three Superior Court judges put the confirmation hearings on hold, and the leaders of the North Carolina General Assembly responded with an alarming statement that was essentially a frontal assault on the independence of the court: “Their decision to legislate from the bench will have profound consequences, and they should immediately reconvene their panel and reverse their order.” The leaders tried to defy the order and continue with the hearings. The judges defended their order to halt the confirmations, though they lifted their order and sided with the legislature on confirmations, though not other issues.

The state Board of Elections and Ethics Enforcement recently received a complaint alleging that the legislators followed through on their threat of “profound consequences” for at least one of the judges. Judge L. Todd Burke, like many other African-American judges in Superior Court, would find himself in a district with another incumbent judge under the most recent versions of a judicial redistricting proposal. The complaint notes that his new district would have substantially fewer black voters.

A series of federal and state rulings have struck down many of the legislature’s changes to election laws. The U.S. Supreme Court has affirmed rulings that North Carolina’s 2011 legislative redistricting maps discriminated against black voters, and it let stand a ruling that the legislature’s wide-ranging 2013 voting law targeted black voters with “almost surgical precision.” State courts are hearing some of the redistricting lawsuits and a case challenging the legality of a December 2016 special session of the legislature. Rep. David Lewis, a key figure in the redistricting saga, called a press conference recently to rail against a voting rights group that filed a lawsuit in state court, accusing it of partisan motivations.

These kinds of responses from legislators, the statements and the alleged retaliation against judges, are an attack on the independence of North Carolina courts. In the last couple of years, the legislature’s veto-proof Republican majority has repeatedly changed how the state’s judges are chosen in ways that would get their preferred judges on state courts.

The most drastic attack on North Carolina’s courts were two proposed state constitutional amendments. One would have essentially put the legislature in charge of choosing judges. Legislators called their plan a “merit selection” system, but unlike most such systems, North Carolina’s merit selection commission would not be charged with narrowing down the candidates and selecting a few to send to the governor, as they are in most merit selection systems. This commission would merely be responsible for deciding if candidates are qualified. Legislators would choose three names from the long list of qualified candidates, and the governor would pick one person from the legislature’s short list.

The other amendment would have shortened judges’ terms to just two years—the shortest in the nation. U.S. Rep. Lewis said: “Some would argue that we do have some activist judges, and the thought would be if you’re going to act like a legislator, perhaps you should run like one.” Other recent changes have already introduced more partisanship and money into judicial elections. In 2013, the legislature repealed the state’s renowned public financing program for judicial candidates, leaving would-be judges to raise contributions from wealthy campaign donors. North Carolina recently became the first state in nearly a century to switch from nonpartisan to partisan judicial races.

When the pending 2016 election had the potential to change the ideological balance of the state supreme court, legislators essentially tried to cancel the election. The justices would have run in retention elections, in which voters simply vote yes or no on whether to keep them in office. Even if voters in 2016 had rejected the conservative incumbent, the proposed system would have ensured a continuing conservative majority for two years. State courts ruled the bill unconstitutional.

After voters chose a new liberal majority, rumors emerged of a court-packing plan to add two seats to the North Carolina Supreme Court before the lame-duck governor left office. Legislators did not move on this plan, but they did change how judges are chosen. The legislature shrank the size of the Court of Appeals, in advance of three Republican members of the court reaching the mandatory retirement age. It also canceled this year’s primary elections for judges.

North Carolina legislators have passed an unprecedented number of laws changing judicial selection in recent years. Constitutional challenges to many of these power grabs are still pending, and rulings that fail to give legislators unlimited power will likely prompt more threats or retaliation.

Local and national media have uniformly condemned the legislature’s power grabs, particularly the proposed constitutional amendments. These attacks on judicial independence come as President Donald Trump and Attorney General Jeff Sessions have also questioned the very legitimacy of federal judges who rule against the administration.

Judges in other states are facing attacks from legislators. The Pennsylvania Supreme Court is currently facing a real threat of impeachment for striking down a redistricting map. Legislators in states like Florida and Kansas have also introduced bills to give themselves more control over choosing judges or change their merit selection systems to make them more like the North Carolina proposal. A constitutional amendment up for a vote in Arkansas would transfer some judicial rule-making authority to the legislature, and this would allow the legislature to overturn a 2013 state supreme court decision to strike down a tort reform law.

The Pennsylvania decision led some observers and civil rights advocates to note the potential for voting rights victories in state courts. The federal courts are being rapidly transformed by President Trump, and some of his nominees have disturbing links to voter suppression. This bolsters the case for a greater focus on state courts and state constitutions, all of which contain a general right to vote that the U.S. Constitution lacks.

But the ability of judges to protect individual rights—even if the legislature or a majority of voters disagree—depends on judicial independence. In the mid-20th century, federal judges who were mostly insulated from political pressure enforced desegregation orders and civil rights laws in the face of defiance from Southern politicians defending white supremacy. Today, judges in North Carolina are under fire from legislators, merely for doing their job and protecting voting rights.

Judicial independence allows the courts to serve as a check on the political branches, when necessary, to protect individual rights. In North Carolina, this independence is under constant assault from legislators intent on installing judges who will rubber-stamp their agenda.