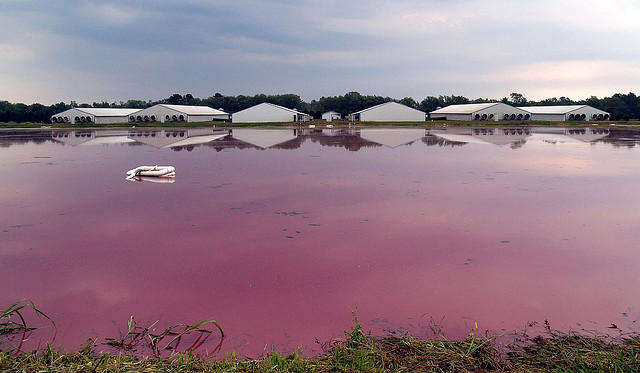 Instead of protecting the people of North Carolina from contaminated water, NC lawmakers are protecting the profits of a multi-billion dollar Chinese corporation. They continue to allow the cheap and unsafe practices of open hog waste lagoons. Why? Because Smithfield Foods donates to their campaigns. The politicians in Raleigh could force the company to put caps on their waste ponds like have done in Montana. They refuse.

As Hurricane Florence brings trillions of gallons of water ashore, the storm is headed straight for some of the largest concentrations of hog farms in the county. And there’s no getting around it: with those pigs, comes a lot of, er … wet waste.

Most of that excrement sits in open-air pits, known as “lagoons,” which blanket the landscape of North Carolina just inland from the coast. If flooding causes those pits to overflow or fail entirely, huge swaths of land could be contaminated with feces-laced water.

The plentiful waste pits are one of a number of environmental hazards in the path of Florence, including Superfund sites, coal plants and chemical factories.

A 2016 study by the Environmental Working Group and Waterkeeper Alliance identified more than 4,000 animal waste pits in North Carolina where pig and chicken excrement is collected.

Kemp Burdette, with Cape Fear River Watch, said the runoff from animal waste is at the top of his list of concerns.

“When you have a swine lagoon breech, it is going to have catastrophic impact on the river,” Burdette said. “We are going to see serious water quality problems.”