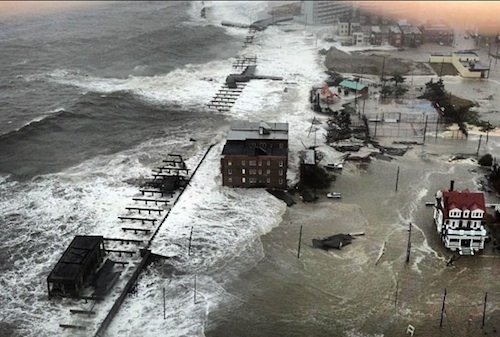 Late night host Stephen Colbert said it best when he said: “If your science gives you a result you don’t like, pass a law saying the result is illegal. Problem solved. Bravo North Carolina.” But the problem is far from solved for the people of North Carolina’s coastal communities.

NC’s Republican leaders wanted to protect the profits of coastal developers and decided to ban the study of sea-level rise. Now we continue to rebuild roads, buildings and infrastructure throwing taxpayer money into the ocean time and time again. Our leaders must stop protecting the profits of their donors, stop denying science, and protect the people by preparing for the inevitable.

North Carolina legislators voted in 2012 to ban the use of a report that showed the ocean could rise as much as 39 inches by 2100.

Now, with Hurricane Florence bearing down on the Carolinas, and thousands evacuating from the coast, that decision is once again making national headlines and drawing criticism from those who say state leaders who approved the bill were nearsighted.

Some are saying the 2012 law could mean more damage from storms like Florence.

In 2010, a panel of scientists from the Coastal Resources Commission presented a report that showed sea levels along the Carolina coast could rise 39 inches over a century, which could put 2,000 square miles in jeopardy.

But that report was not well received. Some lawmakers, lobbyists, real-estate interests and others thought the report could disrupt valuable coastal real estate development and increase insurance costs, ABC News reported in 2012.

So they sought to undercut the scientists’ work.

“After a wide-ranging debate on the validity of climate-change science Tuesday, state lawmakers agreed to ban any state agencies from making policies on sea-level change until 2016,” John Frank wrote for The News & Observer in 2012.

“Republican lawmakers had sought to quash a March 2010 report from scientists with the Coastal Resources Commission that projected a 20-to-55-inch sea-level rise by the end of the century, disputing the science because it would hurt coastal development,” the N&O reported.