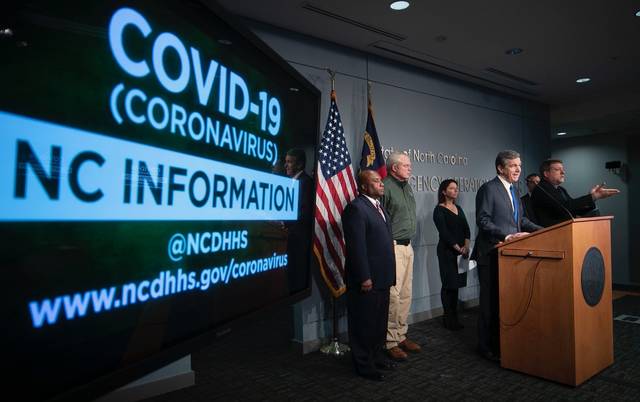 The misinformation and mismanagement of Trump’s coronavirus response, has plagued the current administration and warrants many questions as to why the nation could not have prepared sooner. During the midst of Trump’s deflection of blame, state governors around the country have been advocates for public health and safety during the outbreak, most notably, North Carolina’s Governor Roy Cooper.

With no directions received from Trump during his Oval Office speech on March 12, mayors, state governors and health officials have been stepping up and implementing efforts to combat the growing number of cases in their communities.

Amid the stumbling, contradictions, inaccuracies and confusion coming from Washington on confronting the coronavirus outbreak, governors offered hope and real action.

States, local governments and institutions are acting on their own. North Carolina is the textbook example.

They have acted in a timely manner to address the rapidly changing health environment and worked diligently to be open and keep the public informed.

Diverse agencies – state, local, private and even some federal – are communicating and working together. Universities and local schools; athletic event organizers and entertainment promoters; corporate executives and small business operators; all have been able to find reliable information as well as support as they’ve needed to make critical decisions about whether to hold events; how to coordinate workforce demands and provide a safe workplace environment.

There are more decisions to be made in the coming days, for North Carolina it may require going beyond the governor’s authority to needing the General Assembly’s action to address some critical needs.

The broad cooperation among diverse individuals and agencies must continue so citizens remain confident that it is their health and welfare that is the first priority.

To that end, the General Assembly needs now to work with the governor, the state’s education, health care sector and business leaders to address immediate needs.

There is great danger that people without medical insurance will not seek care if they are sick or get tested. That situation simply increases the broader public danger. The obvious solution is to work with Gov. Cooper and expand Medicaid.

The state’s legislative leadership needs to consider the effect their policies are having on real North Carolina citizens and realize it is time to park its political ideology. Addressing these needs is the right thing to do. There’s plenty of money available to do it.

Our national political leaders have failed their responsibilities. The blame will squarely be on our legislature if it doesn’t avoid the same.

Weeks before Trump made his formal address to the nation, Gov. Cooper created a coronavirus task force to monitor and coordinate actions to deal with the virus.

Numerous state governors across the country, including Cooper, declared states of emergency a week before Trump announced a national emergency, in order to take a wide range of actions to mitigate the spread.

The slow federal response on COVID-19 testing has led to many states spearheading their own test kit developments. Local North Carolina labs including UNC and Duke are helping in the effort to develop kits and potential cures to supply the demand.

State governors have acted in a timely manner and remain open to the public as society changes due to the outbreak. Not only has this virus exposed the weaknesses in our own health care system, but the lack of leadership and accountability from the Oval Office.

During a time of confusion, state governors have become pivotal leaders in providing critical credible information and are enacting vital measures to ensure the health and welfare of the nation.