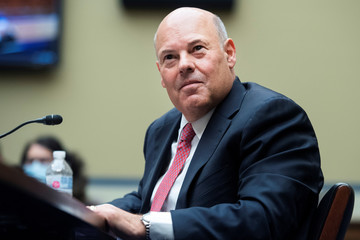 According to the Washington Post, five people who worked for DeJoy’s former N.C. business, New Breed Logistics, say they were pressured by DeJoy’s aides or by the chief executive to write checks up to $100,00 or more, and attend fundraisers for Republicans running for the White House and Congress.

North Carolina’s Attorney General is calling for an investigation into current US postmaster Louis DeJoy.

A new report from the Washington Post quoted former employees who said DeJoy and his company pressured employees into making political contributions to GOP candidates.

Those employees told the Washington Post that he later reimbursed them through bonuses.

DeJoy was a major fundraiser for the GOP – which eventually led to his role as the postmaster general.

Karen Hobert Flynn, President of Common Cause, said, “It’s illegal for any person to reimburse another person for political contributions. Such ‘straw donor’ schemes demonstrate contempt for our nation’s campaign finance laws, subverting contribution limits, donor intent and transparency laws, among others. By disguising the true source of campaign funding, straw donor schemes perpetrate a fraud on the voting public”.

On Sunday, the Washington Post published a story alleging that DeJoy had previously reimbursed private-sector employees for making political contributions —  which is illegal under both federal and North Carolina law.

Several Republicans including Senator Thom Tillis benefited from political contributions. According to The New York Times, in October 2014, 20 mid-level and senior officials at the company donated a total of $37,600 to the campaign of Senator Tillis, who was running to unseat a Democratic incumbent at the time.

Josh Stein said in a statement that “it is against the law to directly or indirectly reimburse someone for a political contribution” and that “any credible allegations of such actions merit investigation by the appropriate state and federal authorities”.

DeJoy is also facing lawsuits from several states, and groups alleging that his actions to undercut the delivery of mail violates the constitutional right to vote and designed to impede efforts to conduct “free and fair elections”.

Bottom Line: Trump continues to try to retain power at whatever cost and by any means he can muster, including getting help from mega donor DeJoy to win his reelection. Trump and his wealthy friend’s will always protect their own interests, not the interests of the people.