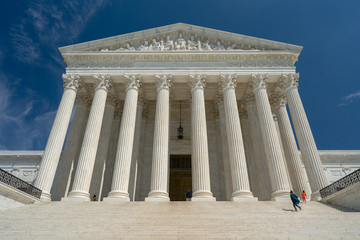 In a statement hours after the passing of Justice Ruth Bader Ginsburg, Senate Majority Leader Mitch McConnell vowed to call a floor vote on Trump’s nominee to replace the former justice. On Saturday, Trump urged the Republican-led Senate to consider “without delay” his upcoming nomination to fill the seat vacated.

Republican Senators’ swift response on the latest vacancy stands in stark contrast to the position many took in 2016, when they refused to consider President Barack Obama’s choice for the Supreme Court ahead of the election.

Democratic leaders, including presidential nominee Joe Biden, accused Republicans of political opportunism and hypocrisy and vowed to fight any effort to rush confirmation of a Trump nominee in the GOP-controlled Senate. With the election 44 days away, Democrats said it would be a grave injustice and a violation of conscience to advance a Trump nominee before the voters render judgment on the president.

Two Republican senators, Susan Collins of Maine and Lisa Murkowski of Alaska, said over the weekend that whoever is elected president in November should nominate Ginsburg’s replacement. But it would take four Republican senators joining with all 47 Democrats and independents who caucus with Democrats to block consideration of a Trump nominee.

Biden and other Democrats have slammed Trump and Senate Republicans for trying to steamroll through a replacement, stating, “Uphold your constitutional duty, your conscience, let the people speak”.

Sen. Thom Tillis and Sen. Richard Burr are among the long list of Republican Senators that refused to pick up Obama’s Supreme Court pick in 2016, but have flipped their position on Trump’s pick.

For now, Trump has announced that he will name his pick to replace the late Justice Ruth Bader Ginsburg on Friday or Saturday.

Days before her death on Friday, Justice Ginsburg, 87, dictated a statement to her granddaughter Clara Spera, saying, “my most fervent wish is that I will not be replaced until a new president is installed,” according to NPR. The Trump administration and Republican Senators maneuvering as many across the country were still reeling from the passing of RBG, is just another example of their attempt to gain political power by any means.

Bottom Line: For the Trump administration and Republican Senators, the passing of RBG, nor the passing of nearly 200,000 Americans from COVID-19 has stopped their hunger for power. Instead of passing a relief bill and leading the country through this national health crisis, the biggest concern is their re-election.