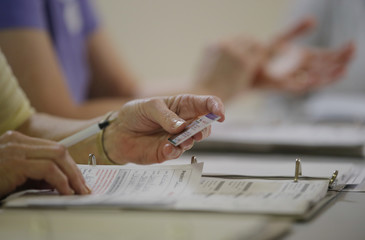 Federal judges struck down previous voter ID schemes in which federal judges ruled that the Republican lawmakers targeted minority voters “with almost surgical precision”. Despite the law blatantly disenfranchising minority voters, Republicans — primarily House Speaker Tim Moore, who was a primary sponsor of the 2018 voter ID law — is pushing for the law to be implemented for the next election cycle.

The 4th Circuit’s ruling reverses a district-court decision that said North Carolina’s 2018 photo ID law would probably have a disproportionate effect on African America voters in the state. The identification requirement had been blocked by federal and state judges, and it did not apply in the November election in which Trump won North Carolina.

The law remains blocked while the separate state case is pending; the federal litigation will also continue. The federal lawsuit, brought by the North Carolina State Conference of the NAACP, is the latest North Carolina election measure scrutinized in court.

T. Anthony Spearman, president of the NC NAACP, said in a statement after the ruling that his organization would continue to “challenge every barrier placed deliberately in the path of the people of North Carolina to express our fundamental right to the ballot. This is a moral and legal imperative for us, and it is an evergreen priority.”

District Court Judge Loretta Biggs struck down the Republican-backed law in late 2019, writing “North Carolina has a sordid history of racial discrimination and voter suppression stretching back to the time of slavery”. Biggs’ ruling helped expand access to the ballot box for many minorities during this 2020 election cycle. Yet, Republicans continue to try to implement laws that come between North Carolinians constitutional right to vote.

For now, “the procedures that were in place for this 2020 election, where ID was not required will continue until some future date when one of these cases sort of reaches a full resolution on the merits. To use a sports analogy, we’re still very early in the game”, according to Jeff Loperfido, a senior counsel for Southern Coalition for Social Justice.

Tim Moore continues to try to re-introduce the same voter suppression bill time after time, and this year, Moore has decided to fall in line with the widely debunked claims of fraud by Trump.

However, in the aftermath of the federal court ruling in 2016, we know this is far from the truth.

Republicans, including Moore, have repeatedly used photo ID, illegal racial gerrymandering and other tactics to rig the system in their favor for years. Even in the face of a pandemic, Republicans still cling to deceptive and oppressive strategies in an effort to undermine voters.

Bottom Line: As a recent News & Observer editorial explains, “If there was an election in which the GOP could prove widespread voter fraud instead of just imagining it, 2020 was it.

Instead, Americans learned what experts had long told us. Election fraud is rare, and the kind of fraud that Voter ID would address – people going to a precinct and attempting to vote as someone else – is almost non-existent”.