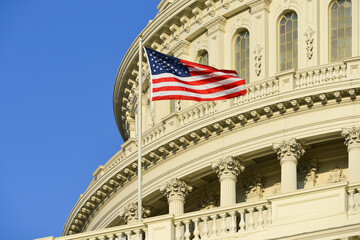 On Wednesday afternoon, a group of violent armed Trump supporters stormed the Capitol in an effort to subvert democracy as Trump continues to interfere with a peaceful transition of power.

Members of Congress were evacuated from the Senate and House chambers due to the attack. Shortly after 5 pm EST, police officers began deploying tear gas in an attempt to finally disperse the mob. Congress’ Sergeant at Arms said the building was secure around 5:30 pm EST.

The attack was not only an attempt to help Republicans in Congress to stop the certification of the electoral college count, but an attack on our country, our democracy and our people, brought on by a president who refuses to accept that millions of us turned out to stand with and for each other to elect Joe Biden.

Leaders across the nation, including North Carolina’s Governor Roy Cooper have condemned the domestic terrorist act, stating, “The peaceful transition of power is the hallmark of our democracy,” Cooper tweeted. “Today’s terrorism is not who we are. This attack on our country must be overcome. America is better than this”.

In a press conference earlier Wednesday afternoon, President-elect Joe Biden addressed the nation, calling for an end to the violence.

“At this hour, our democracy is under unprecedented assault,” Biden said. “Let me be very clear: The scenes of chaos at the Capitol do not reflect a true America, do not represent who we are. What we’re seeing is a small number of extremists dedicated to lawlessness. This is not dissent, this is disorder; it’s chaos. It borders on sedition and it must end. Now. I call on this mob to pull back and allow the work of democracy to go forward”.

Biden also demanded immediate action from Trump, calling for him to “fulfill his oath and defend the Constitution and demand an end to this siege”.

Hundreds of Republican Senate and House members, including several NC lawmakers, who have been peddling Trump’s baseless claims and divisive rhetoric for months are now condemning the very violence that they have helped incite.

These are the NC Republicans who voted to throw out the legal election results:

Among North Carolina Republicans, only 10th District Congressman Patrick McHenry voted to accept results from Pennsylvania. He said in a statement that voting against these “legally submitted electors would violate the oath I took to our Constitution” and set a dangerous precedent.

Their votes were less uniform on Arizona, with Foxx and Murphy voting to certify and the others voting to object.

These are the same Republican leaders who have remained in lockstep with Trump’s rejection of a legitimate election — despite judges dismissing Trump’s legal arguments across the country — and were planning to ignore the voices of over 81 million voters.

These are also the same Republican leaders who attempted to suppress voters by any means, including spreading Trump’s false claims, in order to undermine the will of the people and desperately attempt to hold onto power they clearly do not deserve.

“Donald J. Trump should be impeached by the House of Representatives & removed from office by the United States Senate,” U.S. Rep. Ilhan Omar tweet. “We can’t allow him to remain in office, it’s a matter of preserving our Republic, and we need to fulfill our oath.”

Soon after Omar’s tweet, U.S. Rep. David Cicilline, a Rhode Island Democrat, member of House leadership, and a fellow member of the House Progressive Caucus with Omar, tweeted that he is circulating a letter to gain signatures and then send to Vice President Mike Pence.

Cicilline called for Pence to invoke the 25th Amendment, which could allow a majority of the Cabinet to remove the president and install the vice president as acting president if Trump is deemed unfit to do his duty.

“Vice President Pence can help put down this attempted coup if he wants to,” Cicilline tweeted. “If he doesn’t, then Congress should go ahead and impeach the President.”

Through their silence and hypocrisy, Republicans are making it clear that they have stopped responding to the needs and will of their constituents, especially when it comes to their own interests.

From the president to Senators, House Members to state legislators, who fed and fueled these attacks, they are all a part of the generations of administrations, centuries of discrimination and lifetimes of systemic supremacy that has fomented white supremacy attacks.

Efforts by local Republican leaders to discredit and reject the votes of Americans should not go unpunished. These representatives; Dan Bishop (District 9), Ted Budd (District 13), Madison Cawthorn (District 11), Virginia Foxx (District 5), Richard Hudson (District 8), Gregory Murphy (District 3) and David Rouzer (District 7) are among the long list of Republican leaders that have incited this domestic terror attack through their attempts to overturn the will of the people. These Republican leaders, along with Trump, have broken their sacred Oath of Office, violated the U.S. Constitution and failed democracy.

Bottom Line: Together, we have pulled through everything that’s been done to divide, derail and dishonor our most basic rights. And we will continue to make strides to create a true democracy, where the will of the people determines the actions of our leaders and where our government cares for us all.

We, the people, must demand that Congress immediately hold those complicit in inciting yesterday’s attack accountable.

For the future of our nation and future generations, we cannot let those who have undermined our democracy, our systems and our voices, remain. In order for us to move forward, we must rid our systems of leaders who have normalized white supremacy, attempted to silence Black and Brown communities, and have repeatedly put their own interests above their constituents.