From The News & Observer: ‘North Carolina is a test case, y’all.’ Judge joins rally against changes to courts 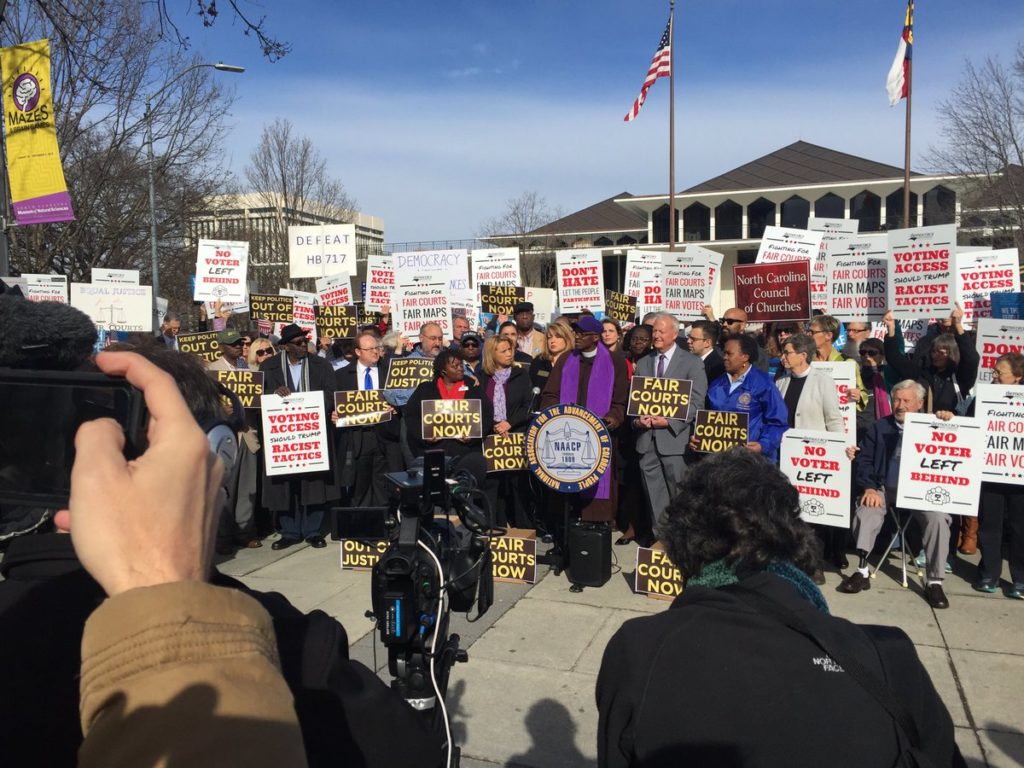 Hundreds of people gathered at the North Carolina legislature to demand that lawmakers keep our courts fair and independent.  Since 2013 fourteen of the General Assembly’s unconstitutional laws have been struck down by the courts.  So the politicians want total control in order to make sure their unfair and unconstitutional laws are no longer stopped in courts. This isn’t fair, and they are willing to dismantle a key pillar of democracy to steamroll their extreme agenda. The people of North Carolina won’t stand for this attack on our democracy.

RALEIGH – A former North Carolina Supreme Court justice joined a crowd of people across the street from the state Legislative Building on Wednesday to speak out against changes lawmakers have proposed for how judges across the state make it to the bench.

Patricia Timmons-Goodson, a 63-year-old lawyer who served as an associate justice from 2006 to 2012, was at a rally organized by the state NAACP, NC Voters for Clean Elections, Democracy NC, Progress NC, Common Cause NC, the Council of Churches, Equality NC and the AFL-CIO.

Lawmakers opened a special session Wednesday with no clear signs that judicial reform proposals would be on their agenda.

But the protesters were lingering in the halls of the Legislative Building to be ready for any surprises.

At the Fair Courts Day of Action, the groups gathered to draw attention to a number of reforms proposed by lawmakers, including new election lines for judicial candidates seeking District Court and Superior Court seats, abandoning elections for an appointment process that would give the General Assembly a key role or creating an election system in which judges have to run for office every two years.

Rep. David Lewis, a Harnett County Republican, told North Carolina Public Radio that the thinking behind changing the election cycle for judges whose terms are now six years, except in the district courts where they are four, was: “If you’re going to act like a legislator, perhaps you should run like one.”

“Statements like that one suggest that there is afoot an effort to retaliate against the judges of this state, judges I might add who can’t speak up for themselves,” Timmons-Goodson told the protesters around her. “Those with the best interest of the state of North Carolina shouldn’t think that way.”

Republicans have characterized their map proposals as changes geared toward fixing piecemeal judicial redistricting over the past five decades. Some have talked about trying to bring a diversity of judicial philosophies to the bench, too.

Timmons-Goodson, a Democrat, also worked as a district court judge in North Carolina for 11 years before serving an eight-year stint on the state Court of Appeals. President Barack Obama nominated her for a seat on the federal bench in the Eastern District of North Carolina, but Sen. Richard Burr, a Republican from Winston-Salem, never put forward the paperwork necessary to put her name before the Senate for consideration.

As a longtime member of the judiciary at many levels, Timmons-Goodson said the courts in this state and country were built on a foundation of independence so they could provide checks on the executive and legislative branches of government.

“What we mean by judicial independence … it’s the principle that judges should reach legal decisions free from any outside pressures,” Timmons-Goodson said. “…Think North Carolina Constitution. Think the Bill of Rights. The law protects such basic rights from the trampling or intrusion of the government. The offender or alleged offender is sometimes the executive branch. Other times the legislative branch. Or even sometimes the will of the majority. Remember that democracy is a form of government based on the will of the people, the majority.”

Timmons-Goodson told a cheering audience “there is a mechanism in place to prevent the majority from running roughshod over the rights of the minority.”

“The courts and judges provide a means of vindication of these rights under the law,” the former justice said. “Citizens through the courts enforce their rights. Courts decide whether executive or legislative branches have violated some protective right. An independent judiciary is one of the bedrock principles that is a part of the interlocking framework of principles that are in place for our nation to ensure liberty. Judges must be free to enforce the law without fear of reprisal. Otherwise the other principles and goals of a free society can easily become empty promises.”

With state NAACP President T. Anthony Spearman by her side, Timmons-Goodson crossed Jones Street, which divided the rally from the offices of lawmakers and the General Assembly chambers, and walked up the steps to the second floor of the Legislative Building to deliver boxes of petitions and comments from people to leaders of the state Senate and House of Representatives.

Two by two, the people rallying for fair courts formed a line behind the former justice and new NAACP leader, and streamed into the Legislative Building in a fashion similar to “Moral Monday” protesters.

Outside, the protesters held placards that said “Fair Courts Now,” “Keep Politics Out of Justice,” “Fair Courts, Fair Maps, Fair Votes” and “No Voter Left Behind.”

One man held up a handmade sign: “Leave the Dreams of Court Domination to the ACC Athletes,” with an exclamation point showing a basketball drawn under an orange net.

Senate leader Phil Berger and House Speaker Tim Moore were not in their offices when the petitions were delivered. At Berger’s office, protesters weren’t allowed inside a blocked door. The visitors were invited to sign a guest book that filled quickly with the names of protesters, some of whom were prepared to engage in civil disobedience.