From The News & Observer: Smaller K-3 classes in NC? Sure, but the state must pay for the teachers 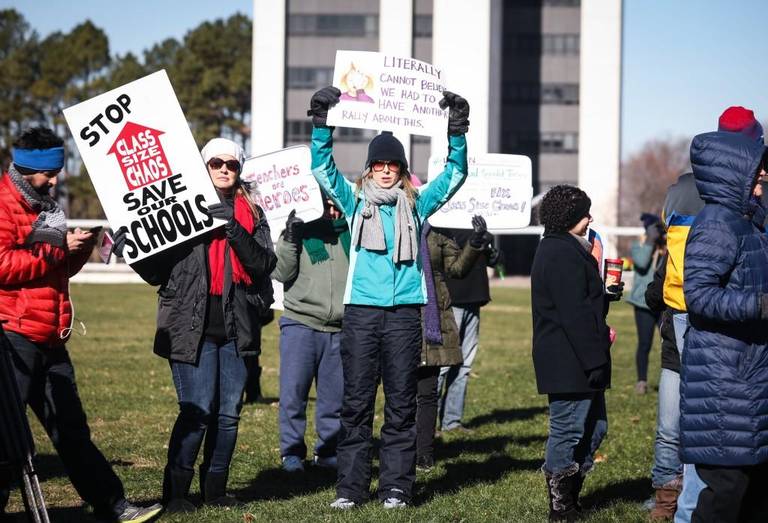 The NC GOP thinks smaller class sizes for grades K-3 are a good idea and it is a good idea.  However, the unfunded mandate they have placed on schools will force them to either increase the class sizes of grades 4 and 5 or cut essential classes like computer science.  Smaller class sizes are better for students but without funding to add classrooms and teachers North Carolina schools can’t make this a reality. Instead, NC schools will be left in chaos and this isn’t good for students.  It’s time that lawmakers, who go back to Raleigh this week, put real money behind their words.

Republican leaders in the N.C. General Assembly are like people who order the biggest steak on the menu and then skip out on the bill.

Oh, they’re all for smaller class sizes in early grades in North Carolina, and so ordered the public schools. The problem is, like so many things on the Republican agenda, their actions are not supported by the reality of budgets.

School officials across the state, but particularly in urban areas, have cautioned that if they have to meet the requirements to lower the average class size from 20 to 17 in kindergarten through third grade classes, and they don’t have additional money to hire more teachers to make that happen, they’re looking at budget cuts in other areas of schools.

Specifically, and this has gotten the attention even of Republicans, some arts and physical education classes might be at risk.

Frills? GOP lawmakers might think so, or might be willing to punt the problem back to parents by saying those things should be paid for as extras with private contributions, but parents don’t see it that way, and they’ve made that clear to Republicans publicly and privately.

So now Republicans are saying, well, they’ll study all this and get some reports on consequences from the schools, etc., and then, oh, maybe they’ll do something.

This is an outrageous lack of stewardship of the schools, irresponsible and misguided and shortsighted and lazy. Passing laws and then not paying for them insults the intelligence of all citizens, but particularly those parents who know the value of arts and P.E. programs to their children.

Gov. Roy Cooper, once again, demonstrates common sense on the issue. The governor says the mandatory lowering of class sizes should be either phased in or delayed to get school systems used to it, and that legislators ought to pay for what they’ve ordered. “I believe,” Cooper said, “smaller class size can be a good thing, but you have to pay for it. This is an artificial class size change – one that shrinks classes on paper but in reality hurts students and teachers.”

Rather than make a showy big deal out of lowering class sizes as if they’re champions of public education – which they are not – Republicans would do better to boost funding for schools to expands arts and physical education classes to the entire state. Talk about something that would get massive support: Parents would strongly back such an effort and credit lawmakers for making it, and would find that far preferable to the budget-crippling tax cuts for business and the wealthy that Republicans seem to set as their top priority on the national and state level.

For now, as they take up whatever political maneuvering in which they’re planning to engage in this week’s special session, Republicans should not push ahead on lowering class sizes on their schedule and instead find a way to make the objective work — with first providing the funding for it.