From The News & Record: Protesters in Greensboro speak out against Duke Energy’s proposed rate hike 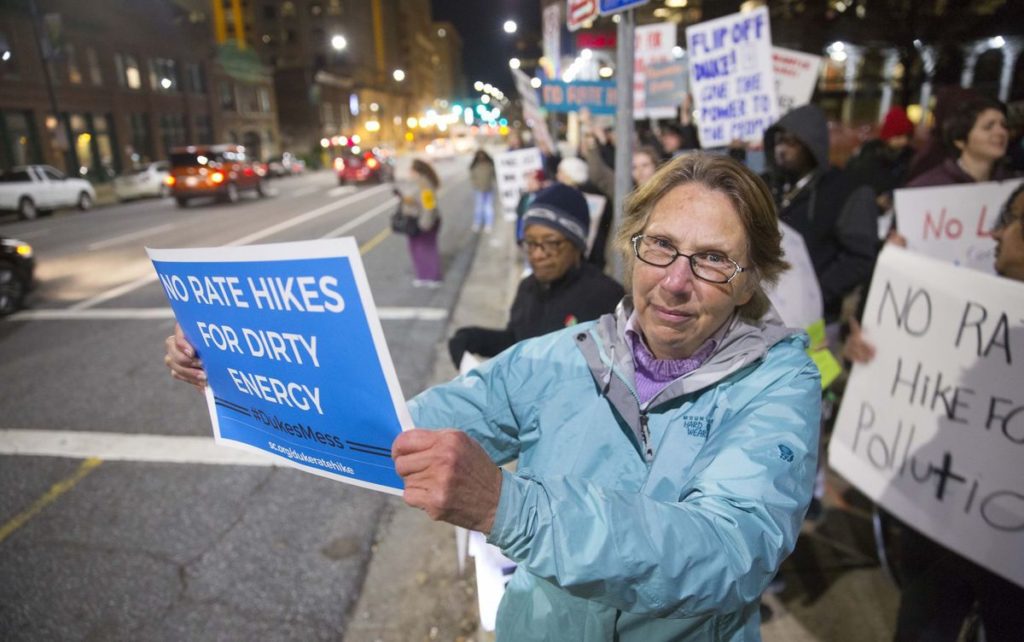 The Republican-led General Assembly had the chance to stop Duke Energy from charging customers to clean up their coal ash disaster, they did nothing.  Now the utility monopoly wants to charge customers for the cost of the cleanup.  A 20% increase in energy cost is, for many, unaffordable.  The people of North Carolina are speaking up, will they be heard?

From the News & Record:

GREENSBORO — There are a lot of ways to say “no,” and the N.C. Utilities Commission heard just about every one of them Wednesday evening from Duke Energy customers who don’t want to see their monthly light bills go up by about 20 percent.

The commission held a public hearing at the Guilford County Courthouse to test public sentiment on Duke Energy Carolinas’ request for an increase of just less than $650 million per year to pay for coal ash cleanup while modernizing other parts of the system and promoting some aspects of renewable energy.

Perhaps unsurprisingly from customers looking at roughly $20 a month in higher costs, the commission heard “no” through the use of plain talk, scientific terms, flowery language and humorous anecdotes.

But no rate increase, especially to the extent that it involves the cost of cleaning up coal ash, was the universal message from several dozen speakers in Courtroom 1-C.

Ruth Martin of Browns Summit asked the six utility commissioners on hand to be the “hard-boiled mom” and mete out justice by requiring Duke Energy to pay for its own coal ash mess rather than dragging customers into the equation.

“I always expected my boys to clean up their own messes. And I think what we’re dealing with is a simple case of responsibility,” Martin said. “The person that made the mess needs to clean it up, not us.”

A number of speakers emphasized that there are many area residents of limited means who would be forced to choose between paying the power bill or buying such essentials as diabetes medicines.

They contrasted that against Duke Energy’s consistent pattern of paying quarterly dividends to investors and the $13.5 million in total compensation paid to its chief executive, Lynn Good, during the 2016 fiscal year.

The commission has a special obligation to consider that because Duke Energy Carolinas has a monopoly on the market, suggested Greensboro resident Clarence Wright.

“It’s either Duke or dark,” Wright said, drawing chuckles from the audience of 150 or so.

He and others urged the commission to deny the Duke Energy Carolinas request because about half would go to coal ash cleanup that a number of speakers said should be paid by the company and its shareholders.