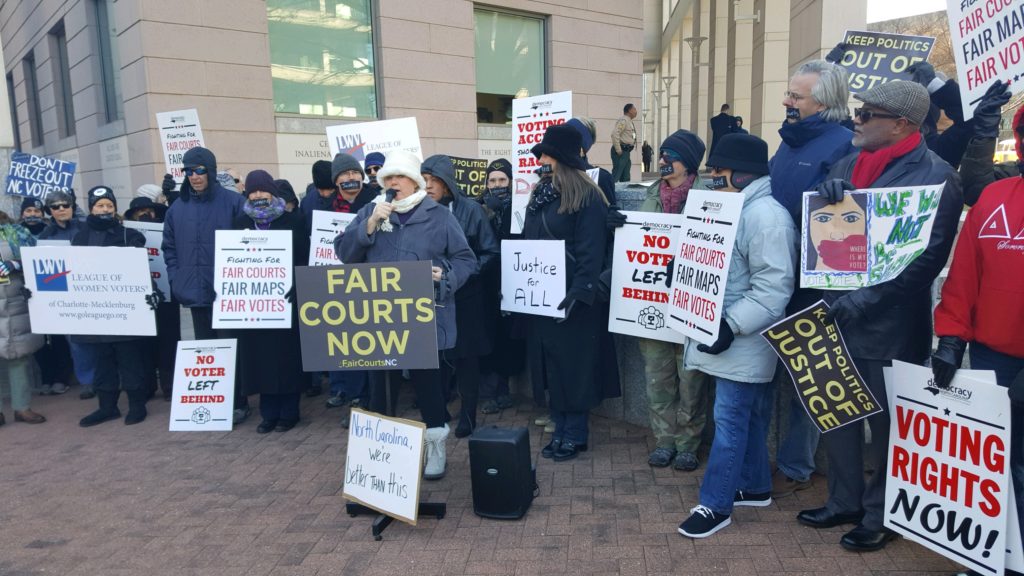 On a cold Thursday, dozens of people marched with tape over over their mouths up to the Mecklenburg County Courthouse in protest of the Republican-led legislature’s plans to rig our court system in their favor.  They have already made the election of judges political, canceled an election, and drafted racially gerrymandered judicial districts in hopes of implementing them in the next election.  They also propose to take away a voter’s right to elect judges and just appoint them themselves in order to cherry-pick judges.  The people of Charlotte know that we must have fair and impartial courts in order to maintain our democracy.

The protesters were a chatty crowd when they gathered at Romare Bearden Park.

Their small talk was soon interrupted by the sound of wide tape being ripped into strips.

Each strip had words like ‘silenced’ or ‘fair courts’ written on the front.

Many participants then placed these strips across their mouths.

Then, with signs in hand and shoulders shrugged against cold and wind, the marchers set off for the Mecklenburg County Courthouse nearly a mile away.

When the procession arrived, they gathered behind a small lectern to show their support for speakers like Democratic state senator Jeff Jackson of Mecklenburg County.

He said the Republican plan to change the judiciary was motivated by spite. “Since 2011, Republicans have seen 15 of their bills struck down either in whole or in part by the courts,” Jackson stated, “So now they’ve decided to attack the judicial branch directly.”

It has been decades since the election districts for superior and district court judges have been redrawn.

Republican lawmakers in the General Assembly say they are long overdue for a makeover since their populations now vary widely.

A second proposal would also seek to amend North Carolina’s constitution to end all judicial elections in the state.

Earlier this week a committee introduced four possible replacements. Each would involve an outside group vetting judicial candidates. Each would then allow the General Assembly to play a significant role in deciding which judge would then get a spot on the bench.

Jackson sees that as a Republican effort to stack the judicial deck.  “That’s why Republican’s preferred method of merit selection would give almost all the power to pick our judges to the state legislature.”

These plans are expected to be considered at a special session of the General Assembly scheduled to begin next Wednesday.