From The News & Record: School protests should make us proud … and ashamed 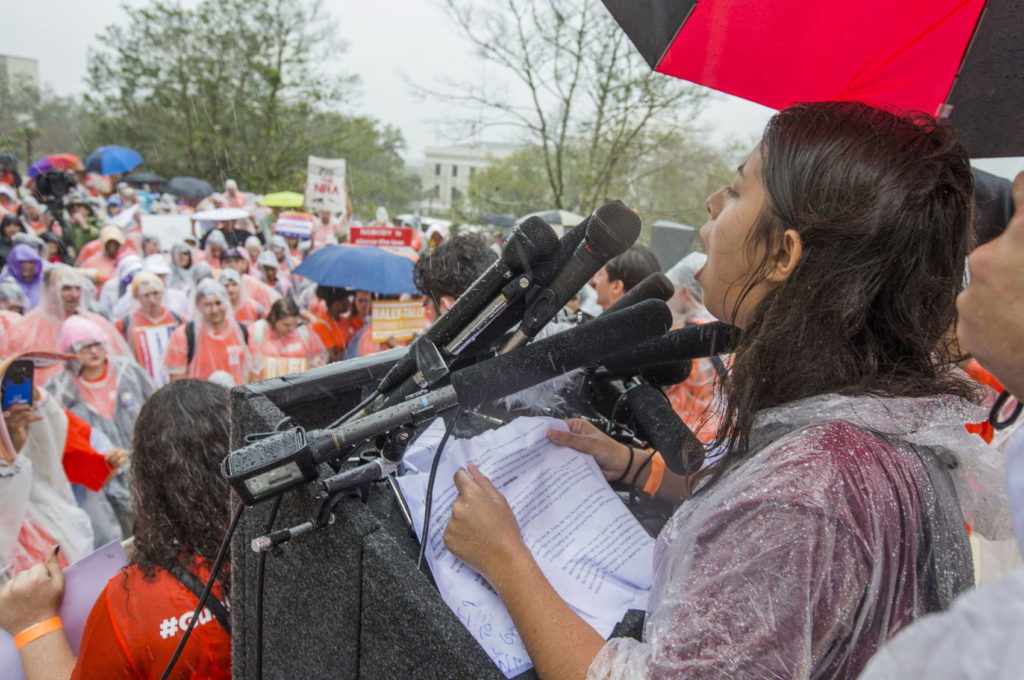 Enraged high school students in Greensboro walked out of classes to demand reasonable gun regulations. They want to feel safe in their school and have made it clear having more guns isn’t going to make their school safer. Meanwhile, our lawmakers are considering a bill that would allow people with no training and no background checks to carry concealed weapons. This House Bill 746, unbelievably, will make it easier for anyone to acquire and carry a gun in our state and will most likely come up for a vote in May.  When the majority of people in North Carolina are supporting stricter background checks and outright bans on assault-style weapons WHY are legislators doing the opposite of what the people want?

From The News & Record:

In the cradle of the sit-in movement, where four college freshmen made history by sitting down, hundreds of high school students in Greensboro on Feb. 23 made their point by walking out.

Good for them. They continued a rich tradition of protest in the Gate City, with a short, thoughtful expression of concern and solidarity with fellow students in Florida who had survived the horror of (the latest) school shooting and were speaking out against gun violence.

Some of us, it appears, would just as soon they would shut up. In Florida and North Carolina. An aide for a Florida legislator alleged that the students in the city of Parkland, where a lone 19-year-old gunman took 17 lives on Feb. 14, actually were “crisis actors” pretending to be students. (It had to be true. He had seen it on the internet.)

Now he is a former aide to the Florida lawmaker.

As trolls roiled against them on the web, the young people weren’t fazed. Cameron Kasky, 17, laughed at the ridiculous rumor that he was a hired actor. “You should have seen me in ‘Fiddler on the Roof,’ ” Kasky said. “Who the hell would pay me to act?”

Closer to home, some of us older folk smirked and sneered after students at Grimsley and Page high schools staged their walkout to express their own concerns about gun violence. One letter writer complained that he was “irked” “by children not old enough to know life’s questions protesting, claiming they have the answers.”

So I say props to them for taking a stand. For behaving like adults while we adults behave like children. (Somebody has to.) And, to put it bluntly, for calling our B.S.

This movement started among students and parents at Marjory Stoneman Douglas High School in Parkland, Fla., on Valentine’s Day. They were asking for — no, demanding — change following the latest mass shooting. They see through the empty posturing and self-interest from those of us who theoretically are older and wiser, one shooting after another.

So they’ve taken matters into their own hands. In Greensboro, the protests were brief and orderly affairs … 17 minutes, give or take, to symbolize the 17 killed at Marjory Stoneman Douglas High. Between 400 and 500 students gathered at Grimsley and approximately 80 at Page.

Teachers and administrators were rightly measured in their response. Grimsley Principal Johncarlos Miller provided guidelines for students on how to stage a peaceful protest once he got wind of the students’ plans. Guilford County Schools Superintendent Sharon Contreras attended the Grimsley protest but did not speak.

Although missing class time for a protest is not an excused absence, Miller chose not to punish the protesters. The rally was neither unruly nor disruptive. The students made a few remarks, randomly and unrehearsed, and returned to class.

Last week, a protest at Cary’s Green Hope High School was even bigger, with more than 2,000 students walking out of class. Just in case someone was disciplined for protesting, a number of colleges and universities reassured students that it would not hurt their chances for admission.

Guilford County Schools Chief of Staff Nora Carr praised the students for their engagement and described the protest as a “teachable moment.” The question is, for whom?

If anything, there was a lesson in it for the rest of us: That we can’t go on like this. That we have to draw a line somewhere.

Why not now? And why not here?

Thankfully, at least some of us have been moved. The CEO of the national retailer, Dick’s Sporting Goods, announced last week that it no longer would sell assault-style rifles or high-capacity magazines. It also will stop selling guns of any kind to customers younger than 21. “If the kids in Parkland are being brave enough to stand up and do this,” Dick’s CEO Edward Stack told The New York Times, “we can be brave enough to stand up with them.”

Walmart followed with an announcement that it, too, no longer would sell firearms or ammunition to anyone under 21.

So, back to the earlier question: Do teens “not old enough to know life’s questions” deserve to be heard?

I suppose someone could have asked the same of those four A&T freshmen on Feb. 1, 1960.