From The Winston-Salem Journal: Town hall highlights concerns with education funding in N.C. 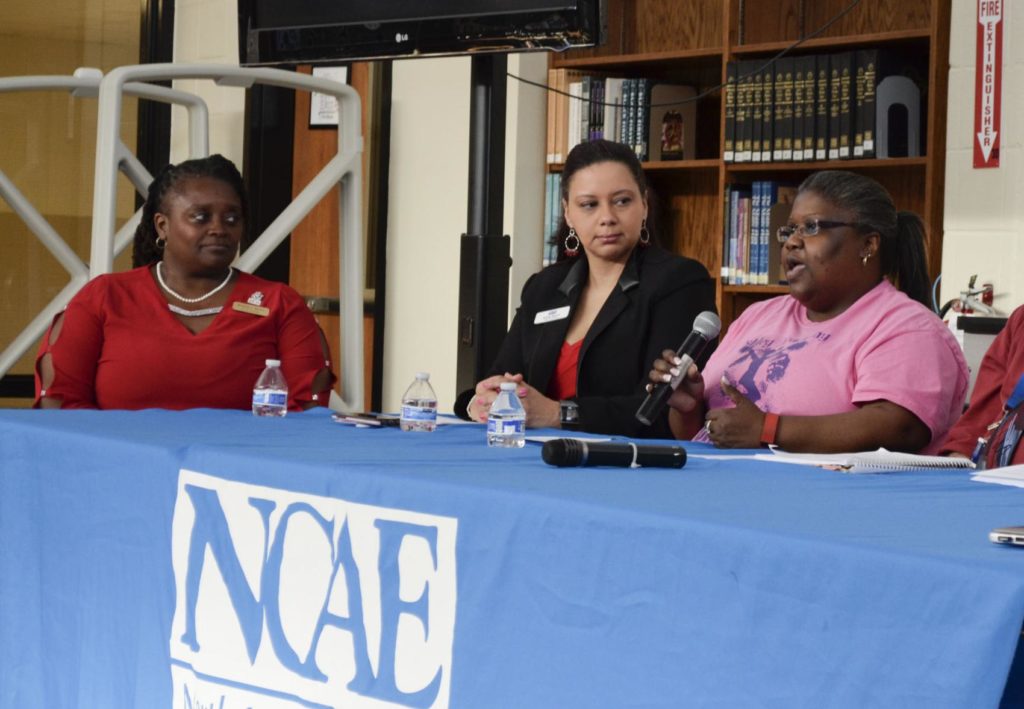 When adjusted for inflation teachers in North Carolina are making 12% less than they were in 1999.  Per pupil spending in the last ten years has been cut in half.  The expectations for teacher’s performance continues to get higher yet they are given fewer and fewer resources.  It’s time that our teachers be paid a decent wage and be given the resources they need to provide the best education they can to our children. It’s time that our lawmakers make education a priority over tax cuts for the wealthy and big corporations.

From The Winston-Salem Journal:

When Valorene Young sees students in her elementary school classroom who don’t have the supplies they need for the day, she buys them with her own money to make sure all her students have equal resources to succeed.

Young, who teaches at Ashley Academy for Cultural and Global Studies, isn’t the only teacher who dips into her own funds to buy school supplies — and sometimes food — for students who don’t have what they need to go about the school day.

“I don’t want any child to feel less than (others) when they step into the classroom,” she said.

Young and other educators spoke about these experiences during a town hall Wednesday night.

Dozens gathered in Parkland High School’s media center as panelists discussed state funding for education — in terms of per-student spending, funding for supplies and teacher salaries — and where they think the state legislature needs to do more for the benefit of teachers and students.

And in WalletHub’s 2017 ranking of best and worst states for teachers, North Carolina was No. 45 — and public school spending per student in the same report ranked 43rd in the nation.

Kristy Moore, vice president of NCAE, and Kris Nordstrom, an education policy consultant who works with the Education and Law Project, were on the panel, as well.

Panelists talked about their experiences, from having to buy supplies out of their own pockets so all students in their class have the resources they need, to some working multiple jobs to make ends meet for themselves and their families.

Wallace said she is one of those teachers who work additional jobs — two others in addition to her full-time job as a WS/FCS educator.

But she still makes sure her students have what they need to learn and be successful, by “any means necessary” to make sure that her kids “have a fighting chance.”

“Both as a mom and as an educator, it breaks my heart to see these kids coming in the classroom without notebooks and pencils and paper and crayons and food,” she said. “And it’s just absolutely amazing to me that we have allowed, as voters, we’ve allowed our state to go so far backward.”

Stuart Eagan, a teacher at West Forsyth, said he attended the town hall because he cares about how public schools and how they’re being treated.

Eagan, who has been an educator for 20 years, said he feels the profession is “not being treated in a professional manner.”

“This is a business of human relationships, not business transactions,” he said.

This town hall comes in the wake of recent and ongoing teacher protests and walkouts in a nearby state for better education funding. NCAE has called for a day of advocacy in Raleigh on May 16, when the state legislators return to session.

Ronda Mays, president of the Forsyth County Association of Educators, invited those in attendance to come to Raleigh to rally “for the schools that our students deserve,” and for the wellbeing of the educators.

“And all of our educators in our district, from our classroom teachers, our administrators, our student services, our custodial staff, everyone that’s in our school district deserves a living wage where they can be able to live their lives without having to work three or four jobs in order to make that happen,” she said.