The Greensboro News & Record: N.C. public school workers have little to fear and everything to gain 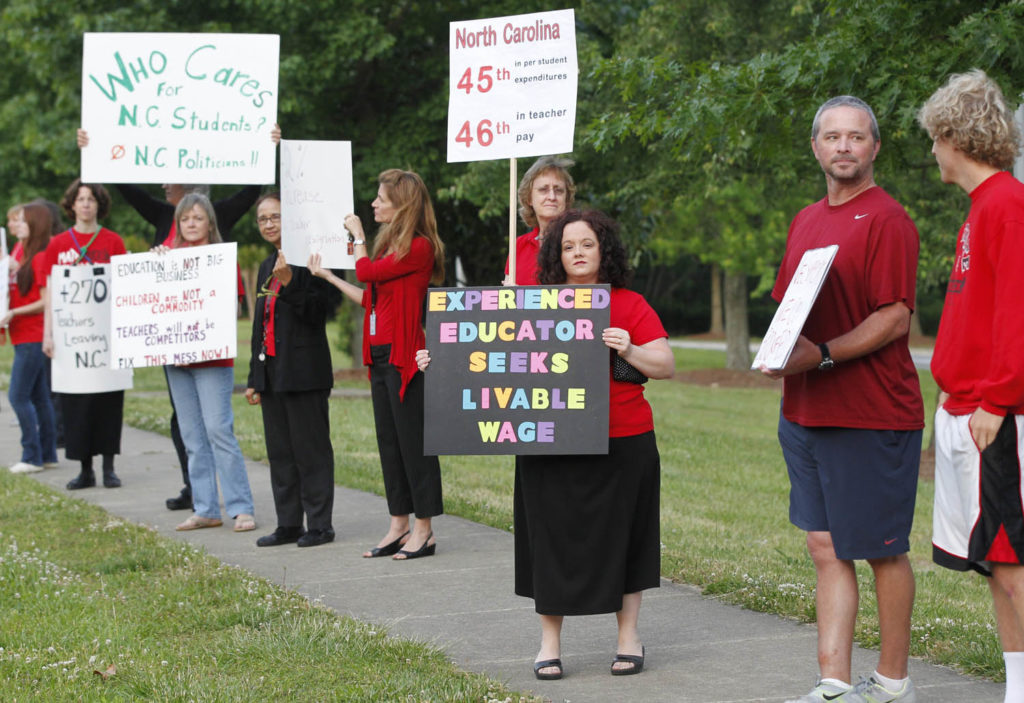 When adjusted for inflation, educators in North Carolina are making 12% less than they were in 1999.  Their classroom budgets have been cut in half over the last 10 years.  They continue to be asked to move mountains without being given the resources to do it.  Educators around the country are demanding that conditions be improved not only for them but for their students.  It’s time legislators listen to the very real situation in North Carolina classrooms. It’s time legislators put education before tax breaks for the wealthy and large corporations.

An unprecedented wave of public school teacher walkouts and strikes, impossible to consider even a few months ago, is overturning assumptions that teachers and other public school workers are either apolitical or fearful to act.

West Virginia kicked off an undeniable movement of teacher strikes across the U.S. Escalating teacher actions there quickly evolved into a 9-day public school walkout shutting down all 55 school districts in the state. Abysmal teacher pay was of course an issue, but West Virginia’s educators stayed out on strike fighting rising health care costs and other issues, all the while making sure students missing school were fed. Now educators in Oklahoma and Kentucky are walking out over per pupil funding and pension plans, respectively. It appears Arizona could be up next.

By any measure of workplace dignity, North Carolina is not very different from these red state upstarts. Despite repeated pleas for full funding, we continue to languish at 43rd in the nation for per-pupil spending but continuously cut taxes for the rich and refuse to spend available tax surpluses on programs that directly benefit children and families, namely public schools and health care.

Young teachers in N.C. have never known anything different, with many believing our current reality is normal. While the wealthy and corporate elite recovered from the recession of 2008, public school teachers and their students did not; N.C. public school teachers earn 11 percent less on average compared to 15 years ago when salaries are adjusted for inflation.

It is a mistake to believe this is solely an issue of teacher pay. Students’ living conditions are also central to the work teachers do. A government that would cut education funding while roughly a fourth of the state’s children live below the poverty level is automatically suspect. Worse still, N.C. child poverty disproportionately affects students of color, with more than 35 percent of black and Latino children living in poverty. Over and over again, our General Assembly has chosen to cut taxes for those who can most afford it and cut public education funding and services for the most vulnerable.

Public schools comprise the largest sector of employees in the state, serving more than 1.5 million students. There are enough of us to say, “Enough!” If our legislature can’t seem to find the political will to do the right thing and bring funding levels to at least the national average, then we should do what teachers always do: roll up our sleeves and do it ourselves.

Let’s take some cues from West Virginia and start with an overall 5 percent raise for all state employees. That way we don’t inadvertently leave out vital school personnel, such as bus drivers and custodians. From there, it would be great to put together an actual plan for increasing teacher pay. Election year bonuses don’t cut it. Set some goals. Here’s a catchy one: Increase N.C. teacher pay to 20th in the nation by 2020.

Predictably, there will be those who argue that teachers need only to vote and let public school issues serve as an electoral referendum in the fall. While it is true public schools are a perennial issue, it is time to leverage our power now. Currently every candidate in the 2018 state House and Senate races faces a challenger. Regardless of party affiliation, every one of these candidates should treat public school funding as a central issue.

Right-to-work laws, collective bargaining restrictions and laws limiting workplace actions have not hindered public school workers in other states; in fact, their restrictions are similar to North Carolina. This should send a clear message to public school employees: There are no immovable objects. Given the right conditions, context and points of leverage, everything is fair game.

Put plainly public school employees in North Carolina should be looking at the growing slew of red states in various stages of teacher revolt and notice what perhaps should have always been obvious: It’s hard to fire teachers for standing up for our rights; there is no one to replace us. In every one of our 115 school districts, teacher retention is a priority issue; no one can afford to fire teachers, certainly not teachers advocating for themselves and their students.

How long will we continue to live like this? A year? Two years? A career?

The N.C. General Assembly reconvenes in Raleigh on May 16. Every one of NC’s public school employees should be there to greet our legislators.