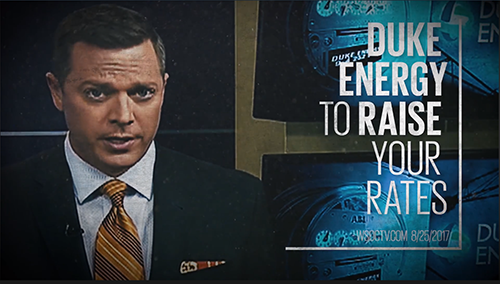 RALEIGH — Progress NC Action is announcing a six-figure digital ad campaign titled “Coal Ash Rate Hikes: Sticking You With The Bill” to spotlight state lawmakers on a key vote and big question of who should pay to clean up Duke Energy’s toxic coal ash across North Carolina. The ads launch just as the NC Utilities Commission considers Duke’s 16.7% rate-hike request on two million residential ratepayers in Charlotte, the Triad, and other parts of central and western North Carolina.

In 2014, state lawmakers killed an amendment to the Coal Ash Management Act that would have prevented Duke Energy from passing coal ash cleanup costs on to its customers. As a result, the corporate polluter is raising electricity rates on millions of families across the state to clean up Duke Energy’s own mess and protecting the giant utility’s Wall Street shareholders. The Utilities Commission has already allowed Duke to raise electricity rates by 6% for ratepayers in eastern NC, in part to raise $232 MILLION for coal ash clean up. A 16.7% rate increase for residential customers in western NC is pending and would raise another $336 MILLION for coal ash clean up.

The Progress NC Action ad campaign beginning this week will hold four NC House lawmakers accountable in the Triad and Charlotte areas for siding with Duke Energy in the 2014 vote: Reps. Bill Brawley of Mecklenburg County, Donny Lambeth of Forsyth Co, and John Faircloth of Guilford Co. Additional ads in the Triad and Charlotte markets will thank four lawmakers who sided with consumers in the important 2014 vote: Reps. Kelly Alexander of Mecklenburg County, Evelyn Terry and Ed Haynes of Forsyth, and Pricey Harrison of Guilford.

“The public should not have to pay to clean up the toxic mess left behind by a corporate polluter,” said Gerrick Brenner, executive director of Progress NC Action. “Unfortunately, politicians in Raleigh voted to let Duke Energy raise electricity rates and dodge financial penalty for their pollution. Thanks to politicians like Bill Brawley, Donny Lambeth, and John Faircloth, North Carolina families are paying the price for Duke Energy’s pollution.”

The “coal ash rate hikes” come after Duke Energy reported over $3 BILLION in profits in 2017, $1 BILLION more than in 2016. This also comes after a Trump corporate tax cut showered Duke with an added $100 MILLION in profits, Duke’s CEO got a 55% raise to $21.4 MILLION per year, and company executives said ratepayers could pay for the coal ash rate hike by cutting down on Big Macs at McDonald’s and taking cold showers.

“With $3 BILLION in profits and a fat Trump tax cut, Duke Energy stock shareholders should be the only ones to pay for the coal ash clean-up,” added Brenner. “State lawmakers had a clear opportunity to hold the polluter accountable, but the politicians in Raleigh sided with Wall Street and the big polluter, not the people at home struggling to pay their power bill.”

The ad campaign accompanies a petition launched by Progress NC Action telling lawmakers to stop corporate polluters from passing on clean-up costs to the hard-working people of North Carolina.