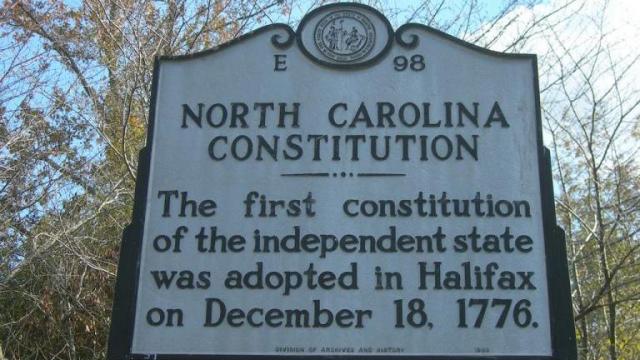 Republicans in Raleigh rightly fear they will soon lose their supermajority.  So they are attempting to rig the constitution in order to ram through their extreme agenda.  They want to trick the people of North Carolina into cementing in tax giveaways to millionaires permanently.  They’d like us to permanently suppress voters with a voter ID amendment that would make a formerly unconstitutional law part of the constitution. We the people have the power to stop these attempts to rig our constitution.  We can vote no.

To hear the General Assembly’s leadership, amending the North Carolina Constitution is a ho-hum affair.

It is not. The current efforts to modify the state’s constitution reveal more about the motives of those doing it than the need to make changes to the cornerstone of our government. It is about desperation politics — trying to boost turnout of their voter base and imposition of partisan advantage that legislative elections may not maintain.

Some are unwise like fixing the Constitutional limit on the income tax rate at 5.5 percent. How more arrogant can you get than to demand the way things are today is the way they should be forever?

Taxes aren’t too high or too low. Future legislators will need the flexibility to get the revenue needed to get the job done and serve the needs of the state. This is legislature that has dangerously low expectations for the state and its future – low wages, low taxes, low skills and low unions. Enshrining that in the Constitution condemns North Carolina to inescapable mediocrity.

Given this broad potential impact, it would be expected that the N.C. Chamber of Commerce might offer its opinion, exercise its clout. But it has been silent – wallowing in the self-satisfaction of huge corporate tax cuts – turning a blind-eye as the legislature attacks our counties, cities, public schools, environment, healthcare system, election process, courts and more.

When it comes to voters identifying themselves at the polls – we’re for it. We support reasonable requirements – including photo ID — that assure the people who vote are indeed, who they say they are. Does it require a constitutional amendment? Probably not.

What it needs is common sense – which federal courts have found to be clearly lacking in our legislature’s recent efforts. If legislators want to require a photo ID to vote – whether in the Constitution or a law – it should meet constitutional muster and include guidance for implementation. Don’t leave it to future legislators to divine.

There’s a bigger point. There are at least 19 different bills to amend the State Constitution in some way. Too many of these, frankly, are dumb and dumber.

Amending the North Carolina Constitution, despite current efforts, is not a spur-of-the-moment, ram-it-through concoction of some Svengali in a legislative leader’s office plotting momentary partisan gain. It is not about rigging elections, tweaking things to give one political party an advantage over another or disrupting the mandate that the executive, legislative and judicial branches of state government are co-equal and “shall be forever separate and distinct from each other.”

It should be a deliberative, thoughtful, thorough process. It SHOULD take time. There should be outreach beyond Raleigh with hearings around the state to explain the proposal and gather citizens’ views.

Shoving through hastily conceived State Constitutional amendments reveals the true motives of those promoting them.

The Republican leadership, fearful the party’s veto proof majority may not hold, seeks to enshrine the power it may not gain through the will of the people. So they’re rigging the state’s Constitution.

It is transparently cynical and partisan. It is a mistake for fair politics and for North Carolina.

We are not optimistic that legislators will gather their wits about them and end this nonsense. We do hope and trust that North Carolina voters will be wiser at the polls. They should reject this harmful manipulation of our State Constitution.

Digital Director
Posted in Democracy, Economy
Sign up for our mailing list to receive a weekly newsletter with fact-based commentary that cuts through the noise to give trustworthy insight about how North Carolina politics and issues impact our everyday lives