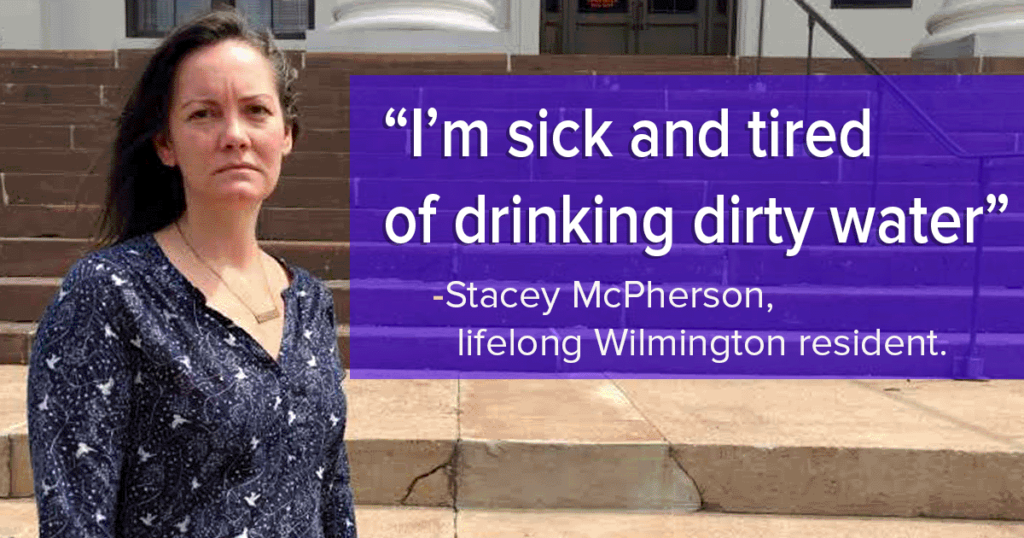 For years Republicans in Raleigh have been slashing the budgets of environmental watchdog agencies, hamstringing efforts to stop pollution in North Carolina and giving large polluters a free pass. It’s been a year since the GenX carcinogen was discovered in the drinking water of Eastern North Carolina and so far legislators have done very little to try to stop it.  By giving money to universities to research rather than to the Department of Environmental Quality who can actually stop the polluters they have made their intentions clear:  Polluters over people.

Just over a year ago, few people in our region had heard the word “GenX,” at least as the name of a chemical. On June 7, 2017, the StarNews reported that the mysterious chemical compound not only was being discharged into the Cape Fear River — the area’s primary water supply – but that the Cape Fear Public Utility Authority (CFPUA) and other local utilities had no ability to filter it out.

People across the region from average citizens to government and health officials posed hundreds of questions, and few were immediately answered. The StarNews has wanted nothing more than to be able to answer those questions. But a year later, answers to most of those questions remain hazy — among them how dangerous is the substance and at what levels and how will we know when there is no longer a GenX problem?

We’ve said before that when we learned a potentially dangerous chemical was in our drinking water, we were confident that finding a solution would transcend the hyper-partisanship that has polluted our once-moderate, practical-minded state politics in recent years. After all, this wasn’t a culture wars issue like the HB 2 bathroom controversy; this was a potential major health threat to a quarter million people.

While area leaders mainly put aside political differences to at least bring attention to GenX, the folks in Raleigh who have the power to do something about it — notably Senate Majority Leader Phil Berger and House Speaker Tim Moore — made little if any effort to address the issue.

The safety standards of water flowing through U.S. rivers is laid out under the authority of the federal Clean Water Act. Most of the actual monitoring and regulatory action is delegated to state agencies — in our case, the N.C. Department of Environmental Quality.

In what seems to be a mindset of “we’ve never met a polluter we didn’t like,” the Republican supermajority in Raleigh has worked to scale back the DEQ during a time it needs more resources to deal with a rapidly growing state and the discovery of even more so-called “emerging contaminants” in our rivers, groundwater and air.

The leadership in the General Assembly has refused to provide the funding the DEQ has repeatedly requested to do its work. After all, the DEQ is controlled by the Governor — at the moment a Democrat — and the Republicans at the legislature have used every tactic they can think of to try to strip him of power.

And who is research director at the N.C. Policy Collaboratory, which will coordinate water testing for contaminants? Why, that would be Jeffrey Warren, former science adviser to Sen. Phil Berger. What a coincidence.

On the surface, leveraging the expertise of the state’s universities to help with water-quality research is not a bad idea. But the collaborative does not fill the role that must be served by a well-funded DEQ. What about accountability and oversight? And then are legal issues, such as chain of custody of samples and data. And with Berger disciple Warren directing its work, it would be naive to think the collaboratory is not politically tainted from day one.

We’ve also previously made the point that policy decisions are initiated on election day. No one should be surprised that a party that goes out of its way to accommodate major polluters — Chemours and the hog industry come to mind — passes legislation that puts the interests of industry ahead of the very-legitimate safety and quality-of-life concerns of the people they are supposed to be representing.

We would say that this devotion to polluters could be changed in November at the polls, but that is not likely to happen as long as gerrymandering rules the day.

So a year into the age of GenX, amid all the unanswered questions, we can say at least one thing definitively: However this problem plays out — and we hope and pray there is a good ending — the North Carolina Republican Party now owns GenX and other toxic chemicals that might find their way into our water.