11/15 The Washington Post: Flake refuses to vote for Trump’s judicial nominees until the Senate acts on bill to protect Mueller 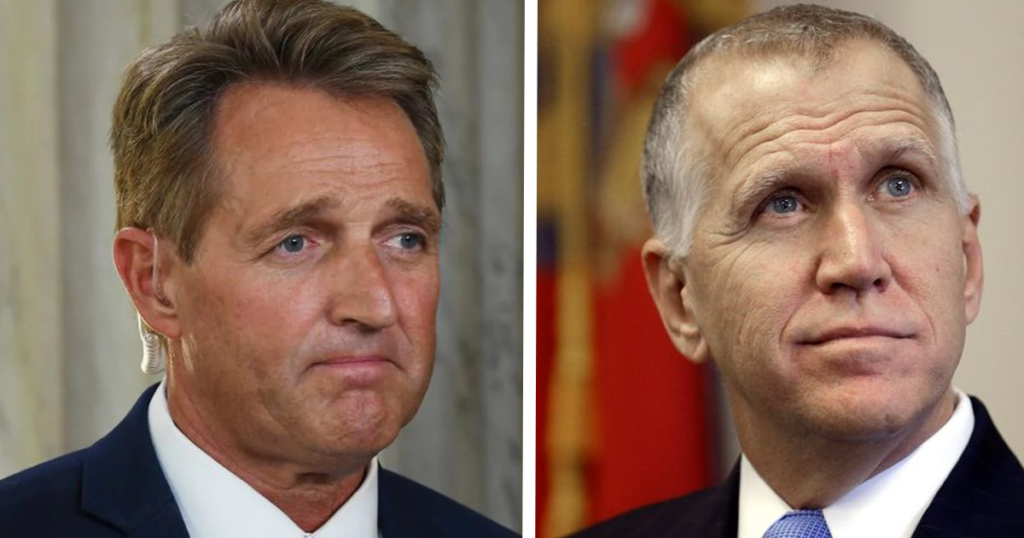 Earlier this year NC Sen. Thom Tillis said that the Mueller investigation should be protected and allowed to be completed. Even after Trump’s firing of Attorney General Jeff Sessions Tillis says he sees no need to protect the investigation. Senator Tillis should keep his promise and join Sen. Flake by refusing to confirm any more judges until the bill he sponsored goes to a vote.

Arizona Republican Sen. Jeff Flake said Wednesday that he would not vote for any more of President Trump’s judicial nominees until the Senate votes on a bill to prevent special counsel Robert S. Mueller III from being fired — a pledge that could complicate Republicans’ hope to confirm dozens of conservative judges before the end of the year.

Flake’s warning will likely force Republicans — who hold 51 seats in the Senate — to rely on Vice President Pence to confirm any of the 32 judicial nominees pending before the full Senate, as Democrats have little incentive to support those who Flake has committed to oppose. It also means that Republicans will likely have to go around the Senate Judiciary Committee, where Flake is a member and the GOP has only a one-seat majority, to advance any of the 21 nominees waiting for that panel’s endorsement. That also will require Pence’s tie-breaking vote.

Flake issued his threat after Senate Majority Leader Mitch McConnell (R-Ky.) blocked Flake and Sen. Christopher A. Coons (D-Del.) from holding a vote on the bill, which would give any fired special counsel the ability to swiftly challenge their termination before a panel of three federal judges. Most Republicans — including co-authors Sens. Thom Tillis (R-N.C.) and Lindsey O. Graham (R-S.C.) — have argued that the bill is unnecessary because Trump would never dare fire Mueller, whose ongoing probe of Russian interference in the 2016 election has sought to learn whether anyone in Trump’s campaign conspired with those efforts.