The Charlotte Observer: CMS cancels classes for May 1 because of planned teacher protest in Raleigh 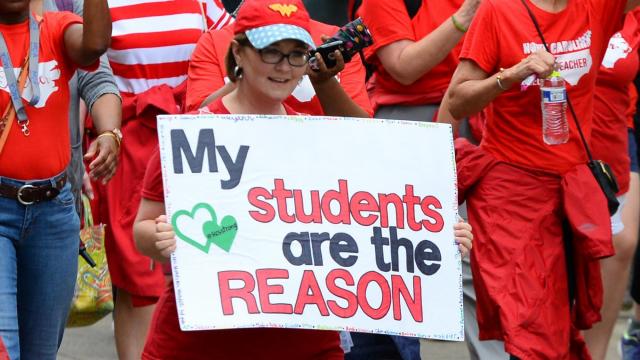 The politicians in Raleigh have done almost nothing to reverse the long-term cuts to our public schools that are making it harder and harder to give our students the quality education they deserve. Instead of reinvesting in public education, lawmakers would rather give huge tax breaks to millionaires and big corporations. Educators have had enough.

Last year’s march for public schools showed politicians that educators are serious about improving public school funding — but that was just the beginning. Lawmakers are working on this year’s budget, but they still aren’t listening to educators. It’s time for us to return to Raleigh.

On May 1, all employees of North Carolina public schools are encouraged to take a personal day and converge on the General Assembly to give the following five demands to state lawmakers:

From the Charlotte Observer:

Charlotte-Mecklenburg School officials have decided to cancel classes May 1, in anticipation of teacher absences due to a protest rally in Raleigh expected to draw thousands of educators from across the state.

Superintendent Clayton Wilcox told the school board this week that more than 1,200 CMS teachers and 100 support staff have asked to have May 1 off so they can travel to the state capital and lobby state legislators for increased funding and other needs.

Wilcox told the board it would be tough to fill that many vacancies for the day, the Charlotte Observer reported this week.

The number expected to attend the rally has since gone up to nearly 2,000 staffers seeking to take off, and CMS officials said they expect the number to go even higher as the event nears.