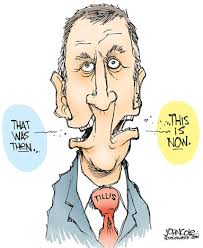 As he gears up for a tough reelection campaign, Thom Tillis has become less of an occasional flip-flopper and more of a mental gymnast, capable of taking one contradictory position after the other as he attempts to curry favor with North Carolina voters while also sucking up to Donald Trump.

This time, “Two-Faced Tillis” claims to be concerned about “foreign intervention” in the case of the Steele Dossier, while Tillis also professes to fully trust Trump’s judgment in cases of foreign governments offering opposition research on his political opponents.

his is yet another example of “Two-Faced” Thom Tillis talking a big game in the media, but collapsing when it’s time to actually do something about it.