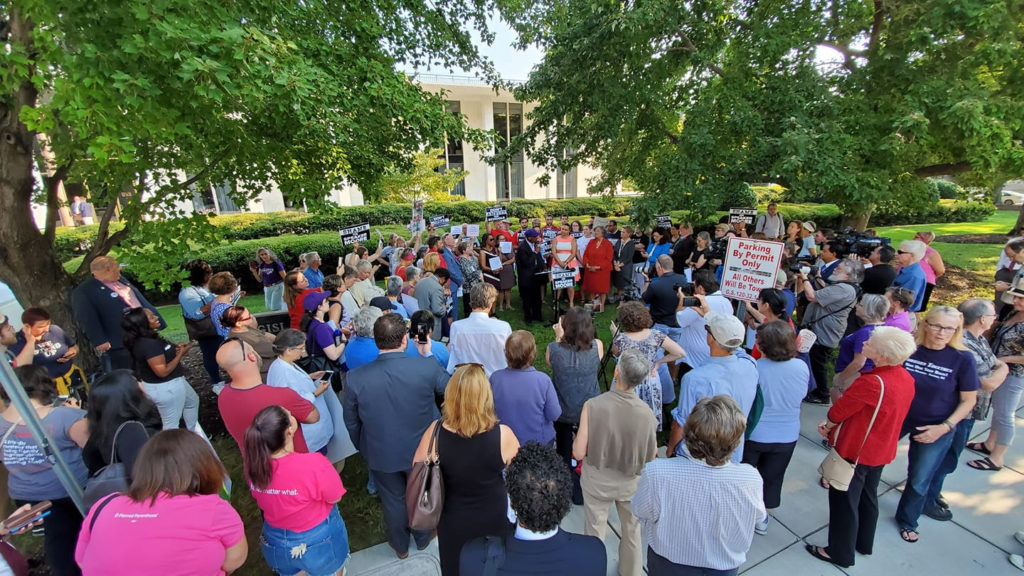 Since they didn’t have the votes to override Gov. Cooper’s budget veto honestly, House Republicans decided to lie and cheat their way to victory

Since House Republicans did not have the votes to override the veto honestly, they told Democrats and reporters there would be no votes on Wednesday. Then with half of the chamber absent (including lawmakers such as Rep. Garland Pierce who were attending 9/11 remembrance ceremonies), Moore used the ill-gotten opportunity to override the budget veto 55-9 out of 120 total members.

“North Carolina is better than this, and our citizens deserve representatives with integrity, decency, and respect for the rule of law.” said Rep. Deb Butler, whose passionate speech on the House floor on Wednesday became a national sensation. “I want a North Carolina that we can be proud of—strong public schools, affordable health care for everyone, and clean water. Unfortunately, Republicans have developed a ‘scorched earth’ political ethic for governing. If you can’t win in the court of public opinion, and you can’t win fair and square, you resort to trickery.”

Following Thursday’s news conference, voters delivered a “resignation letter” (attached below) to Speaker Moore’s office for the speaker to sign.

“I am usually proud to identify myself as a conservative, but today I am not proud to identify myself with people who are deceptive and who use trickery to get their own way on such a sovereign day,” said NC voter Robin Jordan, who became an advocate for Medicaid expansion after her daughter died last year after not receiving the care she needed. “I am not proud to know that people I personally voted for acted in such a manner yesterday. I will remember September 11th, 2019 when I go to place my next vote.”

“This day will go down in infamy in North Carolina politics,” said Rep. Garland Pierce, who was attending a 9/11 memorial ceremony outside the Hoke County Courthouse when the House Republicans orchestrated their ambush override vote. “This was a despicable act to do this on 9/11.”

“This ambush vote is a true assault on democracy — a shameless abuse of power,” said Kristy Moore, vice president of the NC Association of Educators. “This ambush vote shows the need to end these gerrymandered districts.”

“North Carolina deserves a fair democracy, something we don’t have right now, said Chelsea Hoglin of Down Home NC, one of the event organizers.

The “resignation letter” delivered to Moore’s office reads as follows:

To the people of North Carolina,

Please accept this letter as notice of my resignation from my position as Speaker of the North Carolina House of Representatives, effective immediately.

Since I accepted this position in 2015, I have repeatedly abused my power in order to undermine our democracy and betray the people of this state.

I have done this in service of an anti-democratic movement, led by the Republican Party, which has sought to use racism as a tool to weaken and divide North Carolinians for the benefit of the wealthy and powerful. I have gutted our public schools through underfunding and privatization. I have refused to expand Medicaid, though it could be expanded at little cost to our state, and such an expansion could save lives. I have dismantled environmental protections. I have led attacks on women and LGBTQ people, and I have funneled more and more money into the hands of the rich through tax cuts that starve our public services.

I was aided by a rigged system of racist voter disenfranchisement, which I helped to create through extreme partisan gerrymandering, attacks on early voting and same day registration, and proposed voter ID laws.

When our party suffered a setback in the 2016 elections, we aimed to strip the incoming governor and Supreme Court of their powers. When the deep unpopularity of our policies became too glaring to be debated and voted on in public, we passed our budgets in the middle of the night.

Truthfully, I didn’t think we could stoop much lower. But when the people mobilized against us and broke the GOP supermajority in 2018, we had to resort to outright lying and manipulation to enact our agenda. Earlier this week, I even shocked myself when I deceived members of the General Assembly and scheduled a surprise veto override vote in the absence of most of the Democratic members of the House.

After this latest embarrassment, I have finally realized the error of my ways. I cannot, in good conscience, continue to serve in my position as Speaker. I have caused needless suffering across North Carolina, but now I resign in the hope that we might still salvage a better future for this state.