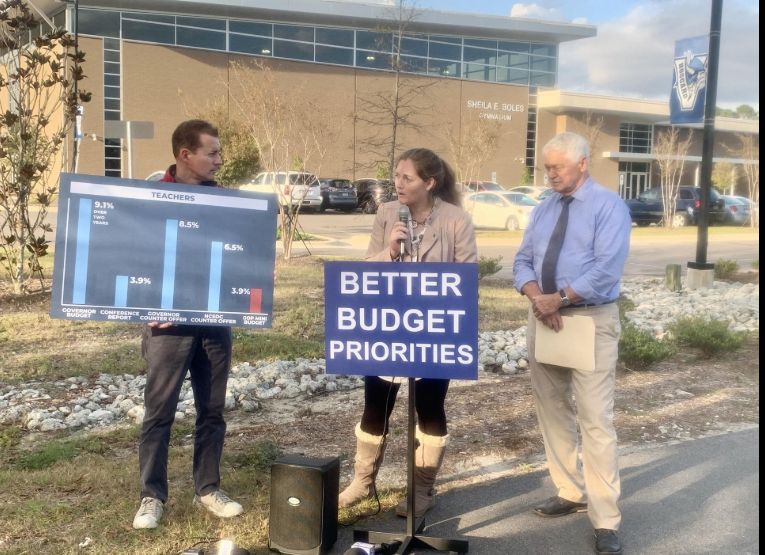 If passed, North Carolina teachers would receive a 3.9 percent raise over two years and not the governor’s proposed nine percent.
Cars zoomed past the corner of Shipyard Blvd and 41st Street while Hoggard High School chemistry teacher Amanda White spoke from behind a podium and a sign which read: “Better budget priorities.”
White was joined by a small group of educators and Senator Harper Peterson to urge Governor Roy Cooper to veto House Bill 377. If passed, teachers would receive a 3.9 percent raise over two years and non-instructional support staff would receive 2 percent over two years.
“I know exactly what I am going to make in 10 years and it’s not something for anybody to be living on single or married,” White said. “You want an increase. You want to be in a position that you can afford a house…but it is not what the current scale provides us. We are looking for something that would help teachers in 10 years stay in the career because we have a high number of teachers who are leaving between year five and 15.”
Gov. Cooper’s initial budget proposal included an average nine percent raise for educators, which Republicans countered with a proposed 3.5 percent raise.
Since then, different teacher pay plans have ranged from 6.5 to 8 percent.
The NC Association of Educators (NCAE) and New Hanover County Association of Educators, along with Progress NC action, came together to raise awareness on the ongoing issue.
“The senate gets it and if the governor vetoes House Bill 377 tomorrow we will stand behind him 21 strong and we will sustain his veto,” Peterson said. “It is that important and the message is that strong and I know the teachers get it.”