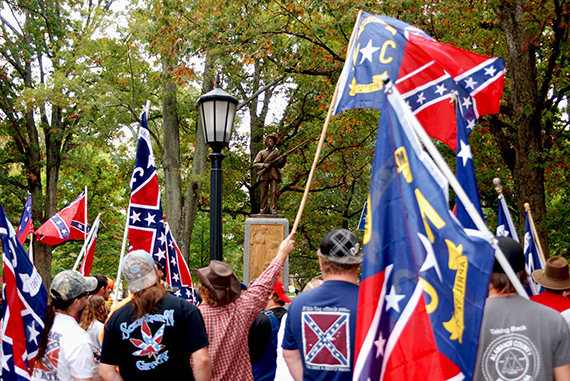 The Andrew W. Mellon Foundation is one of the largest charitable foundations in the world and they are in the final stages of withdrawing their grant after finding out the UNC Board of Governors agreed to a settlement giving the Sons of Confederate Veterans the monument and $2.5 million to maintain it.

The Andrew W. Mellon Foundation agrees that UNC should not be funding a neo-Confederate group that pedals crackpot revisionist history of the Civil War to claim it was fought over “states rights” and not slavery.

CHAPEL HILL, N.C. — A major foundation donor says it pulled a $1.5 million grant slated for the University of North Carolina at Chapel Hill after news broke of the controversial deal between UNC system leaders and a neo-Confederate group over the monument known as “Silent Sam.”

The Andrew W. Mellon Foundation, one of the largest charitable foundations in the world and a key funder of academic research, told WRAL News on Friday morning that it withdrew the grant at “at the final stage” after it learned the UNC Board of Governors agreed to a settlement giving the Sons of Confederate Veterans the monument and $2.5 million to maintain it.

The agreement prohibits the group from displaying the statue in any county that includes a UNC campus and requires UNC-Chapel Hill to pay the money from “non-state funds” like donations or investment proceeds.

Mellon’s $1.5 million grant, according to foundation spokesperson Laura Washington had been in development since the spring to “support a campus-wide educational reckoning focusing on historical truth-telling and confronting the University’s entanglements with slavery, Jim Crow segregation, and memorialization of the Confederacy.”

Washington told WRAL Friday that the foundation withdrew the grant in direct response to the $2.5 million fund directed to the Sons of Confederate Veterans to maintain and display the Confederate statue.

“Allocating university funding toward protecting a statue that glorifies the Confederacy, slavery, and white supremacy – whether from public or private sources – runs antithetical to who we are and what we believe as a Foundation,” she said via text Friday.

In response to follow-up questions, Luck said Friday that the university stood by its previous statement, pointing out that the grant in question had not yet been awarded.

Criticism of the monument deal, from national headlines to faculty and student protests, has focused on whether the university is supporting a white nationalist group. On Wednesday, a civil rights organization announced it would pursue legal action to block the deal.

The Andrew W. Mellon Foundation is one of the largest charitable foundations in the world and a key funder of academic research. According to its publicly available database, it awarded UNC-Chapel Hill seven Mellon grants over the last three years, totaling more than $7 million​.