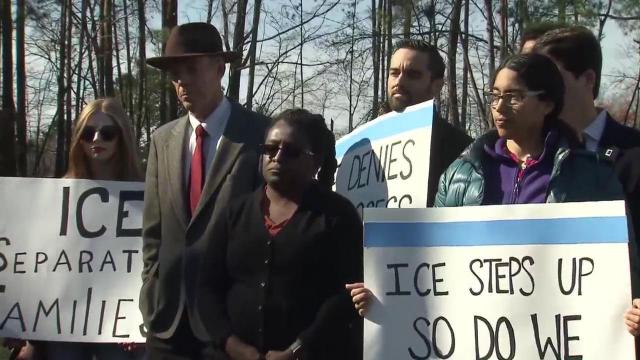 On Monday, city leaders from Raleigh and Durham spoke out against recent ICE arrests in North Carolina. Joined with several immigrant families, leaders are calling out ICE’s actions as undermining the judicial system.

Since January, ICE agents have detained 32 people in 10 counties, including 16 in Wake County last week.

With lawmakers by their side, representatives from four immigrant families spoke to the media in an outdoor gathering on Monday at 10:30 a.m. Each of the families currently has a family member in ICE custody.

Organizers said the event was meant to show unity in what has been a trying time for immigrant communities. “ICE doesn’t want our neighbors to have a ‘first chance,’ to say nothing of a second chance,” said council member Javiera Caballero of Durham. “We have a judicial system that protects our communities. These detentions undermine that system, they undermine the faith immigrant community members have that if they don’t flee the scene of an accident, that if they follow the instructions of local law enforcement, if they show up for their court and probation appointments, they will be better off than if they don’t.”

City leaders said many people detained recently were pulled over by ICE agents in unmarked cars pretending to be police officers.

“They’re taking advantage of the trust many local law enforcement agencies have built over years, that they don’t work with ICE”, said council member Michelle Kennedy of Greensboro. “Many of these people know they don’t have to talk to ICE agents, but ICE agents often don’t identify themselves until after our neighbors have exited their vehicles.”

Data released in 2019 by the U.S. Immigration and Customs Enforcement, found that ICE has steadily been arresting more immigrants who lack a criminal record.

According to the Charlotte Observer, in the past two years, the percentage of those arrested who lack criminal convictions or pending charges, are up almost 50 percent for the Southeast.

Communities across North Carolina have pushed for immigration justice reform, and advocated for equal protections for all. Residents and immigrant communities should feel safe instead of terrorized. No one should have to fear law enforcement agencies that are sworn to protect and serve them.