Americans are concerned about ending the coronavirus lockdowns too soon, poll finds 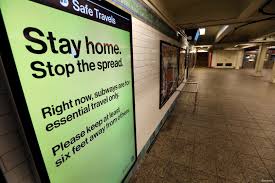 The question of when to start reopening the country has been part of the coronavirus conversation in the U.S. for the last few weeks. With Trump’s constant push to reopen the economy despite a chronic lack of test kits, medical supplies and an overwhelmingly strained health system, the proposed quick turnover is not sitting well with a majority of Americans.

According to a recent Yahoo News/YouGov poll, 71 percent of Americans agree with health experts and are more concerned about lifting the coronavirus restrictions too quickly than lifting them too slowly.

Trump’s assumption about the public wanting to go back to normalcy is far from the truth as a majority of Americans are more concerned about the health and well-being of themselves and their family than the economic risk of a continued shutdown.

The survey, conducted April 17 to April 19, found that a full 60 percent of the public opposes the largely pro-Trump protesters whose calls for governors to “liberate” their states by lifting lockdown measures have attracted intense media attention in recent days — and whose message the president amplified Friday in a series of all-caps “LIBERATE” tweets about three swing states: Minnesota, Michigan and Virginia.

Seventy-one percent say they want public health officials “to be fully able to test and trace new cases and outbreaks” before reopening; only 29 percent say they want the country to reopen “as soon as possible to prevent further economic damage.” And more than twice as many Americans say the U.S. is not conducting enough coronavirus testing to track future outbreaks of the virus (52 percent) than say it is (22 percent).

The reason, according to the poll, is that nearly 90 percent of Americans think a resurgence of coronavirus cases would be either “very” (51 percent) or “somewhat” likely (36 percent) if lockdown ended today. Overall, 79 percent continue to say that stay-at-home orders are “the only way to stop the spread of COVID-19”; only 21 percent say “the cure is worse than the disease.

According to a survey by The Pew Research Center, by a 2-to-1 margin, Americans said that they were more worried about rapidly ramping down social distancing.

In the same survey, nearly 65 percent of Americans say Trump was too slow to take major steps to address the threat to the United States when cases of the disease were first reported in other countries.

Instead of trying to gain partisan advantage by scapegoating Democratic governors who are in the middle of managing an unprecedented crisis, Trump needs to listen to the experts and provide adequate resources and leadership needed to guide this country through this public health crisis.

State governors continue to stand up in place of Trump’s lack of accountability and empathy, and it’s time that Trump answers to the demands of relief. The pandemic should not be an opportunity for Trump to showcase his power, but rather an opportunity for all of us to come together and protect each other despite our differences.