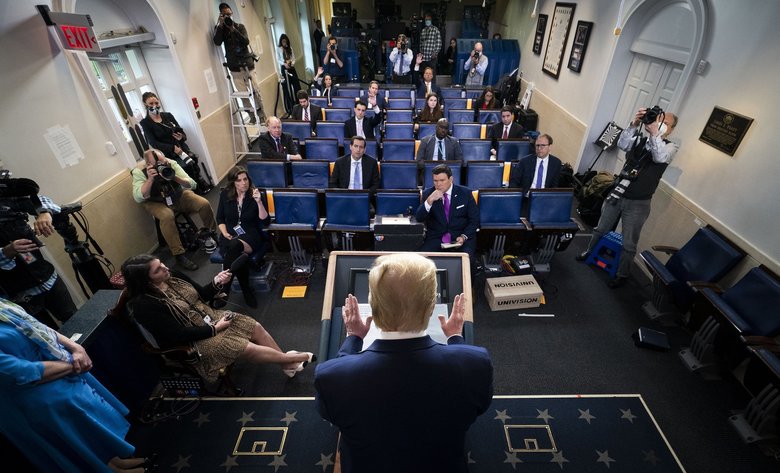 From Trump’s suggestion of “injecting” disinfectant into the body to arguing with state governors asking for crucial aid, the long list of the Trump administration’s mismanagement of the health crisis continues as the U.S. climbs to over 960,000 COVID-19 cases.

Trump, who called for governors to “liberate” their states by lifting lockdown restriction — despite health officials warnings — is worrying a majority of Americans as cases continue to increase. In recent weeks, numerous polls have been released showing that — contrary to Trump’s assumption of public opinion —  Americans are more concerned that stay-at-home orders will be lifted too quickly.

At his daily news conferences, and in frequent tweets about the virus, Mr. Trump has sought to project authority as the nation weathers the storm. But he has hardly let up on his habit of lashing out at political opponents, and he has refused to take responsibility for things like shortages of test kits and medical supplies, which many governors say they need.

Most Americans are not convinced of the president’s position. Roughly seven in 10 said the federal government should be doing more to address shortages in personal protective equipment and medical devices, the CNN poll found. And by a 14-percentage-point margin, most respondents to that survey said the federal government had done a bad job of preventing the virus’s spread. (That is a significant change since last month, when back-to-back CNN polls found the public more split on the question.)

As the pandemic has worsened nationwide, Americans have expressed widespread approval of their own governors (72 percent, according to a Monmouth University poll released this week) and of federal health agencies (66 percent, per the Monmouth poll). This bucks the trend in recent years of waning faith in American institutions.

But Mr. Trump has never shed his public persona as an anti-establishment firebrand. Throughout the crisis he has criticized everyone from nonpartisan inspectors general to popular state governors. So the president will need to contend with Americans’ belief in core institutions — which Mr. Biden has consistently echoed — alongside their wavering confidence in Mr. Trump himself.

“He likes to say, ‘Well, the governors messed up,’ and ‘China lied to me,’ and all this other stuff,” Bob Shrum, the director of the Center for the Political Future at the University of Southern California, said in an interview. “I think it’s a little like Herbert Hoover saying, ‘The Great Depression, you know, that’s really a world problem.’ People’s reaction was: ‘Well, wait. You’re the President of the United States. Fix it.’”

According to a recent Yahoo News/YouGov poll, 71 percent of Americans agree with health experts and are more concerned about lifting the coronavirus restrictions too quickly than lifting them too slowly.

In a survey by The Pew Research Center, by a 2-to-1 margin, Americans said that they were more worried about rapidly ramping down social distancing.

Almost 70 percent of Americans trust what their local officials and government health experts are saying about the virus, according to the latest NBC News/Wall Street Journal poll.

Currently, more than 97 percent of the U.S. population is under a stay-at-home or shelter-in-place.

Instead of a unified national response to the virus, Trump’s lack of leadership, dismantling the agencies needed to combat the virus, and inept coordination, has cost thousands of lives.

During a time when leadership is needed, health officials and state governors have filled the gap left by the federal government and have spearheaded urgent and swift actions to stop the spread of COVID-19.

Despite the setbacks and lack of aid by the federal government, state governors and experts have shown what true leadership looks like, by stepping up and taking swift actions to keep everyone safe.