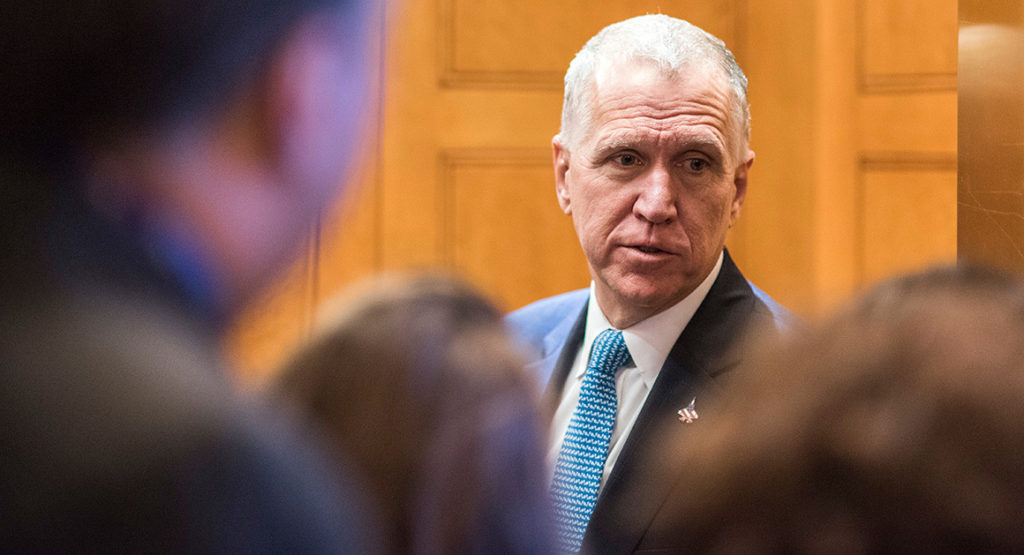 According to a new report, North Carolina Senator Thom Tillis received more than $156,000 from political action committees tied to drug manufacturers in 2019.

Sen. Tillis, a chairman of the Subcommittee on Intellectual Property, received more money than any other member of Congress from the PAC, according to a new analysis of KHN’s Pharma Cash to Congress database.

Pharma’s lobby and PAC donations to Senator Tillis and other lawmakers may have an impact on whether a future treatment for the pandemic will be affordable and accessible to everyone who needs it.

It’s no accident that drug corporations chose Sen. Tillis for over $150,000 in donations in just one year. Sen. Tillis is chairman of a little known Congressional subcommittee that sets policies on patents and trademarks that Big Pharma companies depend on to block competitors and exert monopoly control over drug pricing.

Exclusive patents and licenses for brand name drugs enable drug corporations to set high launch prices and to keep those prices as high as they want, making the drug industry more profitable than just about any other. Big Pharma’s price-gouging on insulin is one of the best-known examples. About 13% of adult North Carolinians need insulin to regulate their diabetes. Thanks to monopoly control of the drug, pharmaceutical corporations tripled the cost of insulin over ten years, leaving one in four Americans rationing a medicine that’s been around for nearly a hundred years.

Sen. Tillis actually wrote a bill to give drug corporations even more monopoly power to raise prices – a move that unleashed Big Pharma’s tidal wave of campaign cash. Only one other Senator, Republican Majority Leader Mitch McConnell, received more money from drug manufacturers than Tillis. It’s hardly a surprise then, that neither one of them supports popular reforms to lower drug prices like allowing Medicare to negotiate for lower drug prices.

In 2017, Tillis voted for Trump’s tax law that gave over $8 billion in tax cuts to drug corporations, despite their price-gouging on patients.

In the last decade, drug corporations have spent over $233 million per year on lobbying, according to a study published in JAMA Internal Medicine.

Our representatives must put the health and well-being of the people, especially during a crisis, before the profits of corporations. Senator Thom Tillis should be fighting to lower exorbitant drug prices for his constituents rather than protecting the profits of his donors.