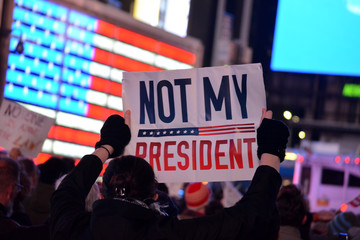 Since taking office in 2016, Trump has sown division and has targeted his hatred towards swaths of people — including veterans, immigrants, disabled people, and Muslims, among others — while inciting fear about the future of the country.

The recent actions of Trump and his administration are among a growing list of calculated tactics to sow division and are acts of aggression that are consistent with several decades of GOP campaign strategy starting with Ronald Reagan in Philadelphia, Mississippi.

Yet, Trump started to lean on racial strife as a tactic long before his time as president, reaching back to his New York City real estate career in the late 1970’s. According to Politico, in 1989, Trump took out four full page ads in New York city papers to argue for bringing back the death penalty in light of the Central Park attack for which five black teenagers were falsely charged and sent to prison. In the May 1989 newspaper ads, Trump stated “I am not looking to psychoanalyze or understand them, I am looking to punish them”.

Years later, Trump never fully backed down from those Central Park Five comments despite all of the evidence the teens were innocent.

The tough-on-crime ethos has extended to Trump’s political career, during which he has tended to double down on the instinct to fight.

On Saturday, his comments on the aftermath of Floyd’s death focused on the might of police and the Secret Service and cast African Americans — whom the Trump campaign is aggressively courting — as outside of his own political base. “MAGA is Make America Great Again. By the way, they love African American people, they love Black people. MAGA loves the black people,” Trump told reporters before boarding a flight.

So much of Trump’s business and political career has hinged on moments of racial strife: from the full-page ads he took out to condemn the Central Park Five in New York in the 1980s to the groundwork he laid for his own presidential bid by promoting the Obama “birther” conspiracy theory to his refusal in 2017 to condemn white supremacists in Charlottesville, Va.

Trump has continued to incite division through his recent action of erasing transgender civil rights protections in health care on the four-year anniversary of the massacre at a gay nightclub in Orlando and in the middle of Pride Month.

Trump’s administration scheduling his first rally on Juneteenth, which commemorates the end of slavery in America and in Tulsa, which in 1921 was the site of a race massacre, is not coincidence either.

In the wake of protests in response to George Floyd, an unarmed Black man who was killed by police,  Trump held a video-conference call with the nation’s governors in which he called on them to crack down on and “dominate” demonstrators protesting against police brutality.

Trump has an exhausted list of using hatred and division as benefits to his career. Trump leads by chaos, not by responsibility. His delayed reaction and inaction towards the pandemic, is just one of many failures, while continuing to roll back on environmental protections, giving handouts to big corporations and forcing states to reopen, despite America hitting over 2.15 million COVID-19 cases and over 40 million Americans filing for unemployment.

Trump uses what he’s always known — racial strife, division and hatred — as opportunities to get what he wants. America deserves a leader that has intelligence, decency, and integrity, not one that will cower in a bunker and use tear gas and rubber bullets on their constituents. America deserves better.