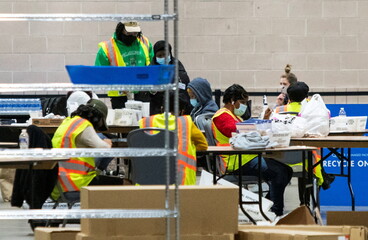 As voters in record numbers selected Joe Biden for President of the United States, down-ballot races within North Carolina are still being decided as election officials continue to count votes.

One of those up-in-the-air races is for the top slot of the state’s judicial system. The sitting Chief Justice, Democrat Cheri Beasley, was challenged by her fellow NC Supreme Court Justice Paul Newby, a Republican.

Newby is leading by just 3,475 votes in an election in which 5.49 million votes were cast, as of a count of unofficial results Saturday morning.

Beasley became the first Black woman to sit at the helm of the NC Supreme Court when Gov. Roy Cooper appointed her in 2019. Before that, she had broken another barrier—the first Black woman to be elected to statewide office when voters backed her in her 2008 bid for a seat on the NC Court of Appeals bench. During her tenure as chief justice, she opened up the public’s access to the high court, by streaming oral arguments from the Raleigh courtroom where they meet, and was most recently tasked with guiding the state’s court system through the start of the COVID-19 pandemic. In that roles, she’s made tough calls on how to operate public courtrooms in the midst of the nation’s biggest public health crisis.

Newby, her challenger, had been the longest serving and lone Republican on the state Supreme Court, and ran his campaign on promises of judicial restraint.

As we all now know, the election in North Carolina is not over though the voting part of it is, with the state races still too close to call.

North Carolina is among several other states that have local races still up-in-the-air, as the remaining absentee ballots along with provisional ballots could decide close races.

Since Oct.19, the NC State Board of Elections directed county boards of elections to reach out to voters with problems with their absentee ballots to ensure that eligible voters can successfully and safely cast ballots.

Voters have until Nov. 12 to cure their absentee ballots and deliver it to their county board of elections no later than 5 p.m. Thursday, November 12.