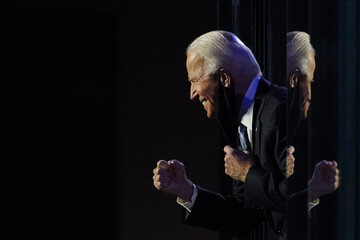 On Saturday, after securing a 30,000 vote lead over Trump in Pennsylvania, Joe Biden was declared to become the next president of the United States. Biden crossed the winning threshold of 270 Electoral College votes with 290 versus Trump’s 214.

Over 75 million people across the nation voted for Biden, setting the 46th president with the most votes of any candidate in American history. That number is expected to increase, as states continue to count remaining ballots.

Mr. Biden’s victory amounted to a repudiation of Mr. Trump by millions of voters exhausted with his divisive conduct and chaotic administration, and was delivered by an unlikely alliance of women, people of color, old and young voters and a sliver of disaffected Republicans. Mr. Trump is only the third elected president since World War II to lose re-election, and the first in more than a quarter-century.

Appearing Saturday night before supporters at a drive-in rally in Wilmington, Del., and speaking against the din of enthusiastic honking, Mr. Biden claimed the presidency and called on the country to reunite after what he described as a toxic political interlude.

“Let this grim era of demonization in America begin to end here and now,” he said.

Without addressing Mr. Trump, the president-elect spoke directly to the president’s supporters and said he recognized their disappointment. “I’ve lost a couple of times myself,” he recalled of his past failures to win the presidency, before adding: “Now let’s give each other a chance.”

With more than 75 million votes so far, Biden broke the record previously set by President Barack Obama, who received about 69.5 million votes to win in 2008. According to NBC, the 2020 election is on pace for a record turnout, with at least 159.8 million Americans voting — that’s the highest turnout rate among eligible voters since 1900.

The newly elected vice president, Kamala Harris will also make history as she is the first Black, Indian-American, and woman to become VP of the United States.

Biden’s victory reflects our nation’s rejection of Trump’s divisive and failed leadership. Trump has left our country grappling with racial injustice, environmental devastation due to his administration’s rollbacks on hundreds of protections, and over 236,000 Americans dead due to his failed COVID-19 response.

Voters are tired of Trump and the GOP’s tactics to block ballots, disenfranchise voters and spread disinformation for their own political gain — and they continue to overturn the will of the people by slowing down the transition process because they’re terrified of losing power.

At the end of the day, Trump and the GOP are done talking and it’s time to have our say.

Bottom Line: The people have spoken, and selected Joe Biden to tackle challenges we face, from COVID-19 to record unemployment to ensuring all of us can get the care we need.

It’s time to put Trump and his politics in the past. Now, we must uphold the democratic transfer of power as we have since our founding and ensure that the leader we have chosen is sworn in as President.