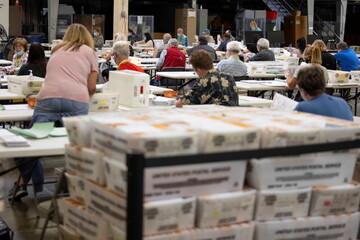 As of Monday, almost 4.6 million have cast ballots as North Carolina sees  ‘unprecedented levels’ of voting. Before Election Day even begins, North Carolina has already nearly seen as many voters as turned out in 2016 and the state has already surpassed the total number of votes cast in 2012 and 2008.

But there are still as many as 3.7 million — 38 percent of the state’s registered voters — who have not yet cast ballots. About 934,300 absentee ballots have been received and will be counted when the polls close. But at least half a million mail-in ballots that have been requested, have not yet been received.

In a last ditch effort, Trump has continued to spread baseless claims surrounding mail-in ballots and election results on the eve of Election Day.

We have a president who is bent on planting doubt, conjuring confusion as well as abusing the courts and the postal service to keep some voters away from the polls or preventing their properly cast ballots from being counted.

Fortunately for North Carolina voters most of the efforts by President Donald Trump and his enablers on the national and state level have proved futile. Many, but unfortunately, not all.

Amidst the GOP’s voter suppression acts, groups like Sunrise Movement, the national youth-led climate justice organization, are making sure that every vote is counted by calling on all NC lawmakers to sign the #PledgeToCount every vote.

Given the NC Republicans’ history of voter suppression and gerrymandering, the group is calling on NC GOP legislators, including Phil Berger, Tim Moore and former Speaker of the House, Thom Tillis, to sign the pledge ahead of the election and ensure that every eligible vote is counted.

The GOP has historically attempted to undermine voters for decades, but our collective resilience to make sure that our voices are heard despite the obstacles, shows our power. From voter suppression, lack of health and financial aid amidst a pandemic, to attempting to strip away health coverage for millions with pre-existing conditions — Republicans have shown time after time that they only care about their own interests, not ours.

And now, they are doing whatever they can to quiet our voices, but at the end of the day they’re done talking and it’s time to have our say.

Bottom Line: The basis of democracy is that we pick our leaders – our leaders do not pick their voters. And in the coming days, we can uphold our democracy by ensuring every vote is counted and demanding that our leaders do the same.

Every eligible vote should be counted and every voice needs to be heard.