The News & Observer: On the impeachment vote, one NC senator represented us well 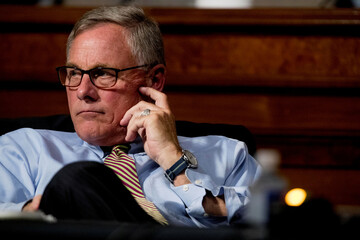 On Saturday, the Senate found Trump not guilty of inciting the Jan. 6 insurrection after a majority of Republicans voted against convicting the former president. Democrats’ needed 17 Republicans to join them in order to reach the two-thirds threshold needed to convict.

Seven senators, including North Carolina Senator Richard Burr, stood with Democrats in upholding democracy and their oath by voting to convict Trump. Their decision marked the senate trial as the most bipartisan impeachment vote in U.S. history.

“I do not make this decision lightly, but I believe it is necessary,” Burr said in a statement. “By what he did and by what he did not do, President Trump violated his oath of office to preserve, protect, and defend the Constitution of the United States.”

Tillis, like most of his fellow Republicans, dodged the issue of Trump’s clear culpability by saying impeachment does not apply to those who have left office. Burr correctly saw that after the Senate voted to proceed with a trial, the Republicans’ objection was moot.

Burr said, “The Senate is an institution based on precedent, and given that the majority in the Senate voted to proceed with this trial, the question of constitutionality is now established precedent.

“As an impartial juror, my role is now to determine whether House managers have sufficiently made the case for the article of impeachment against President Trump. I have listened to the arguments presented by both sides and considered the facts. The facts are clear”.

Burr’s colleague, N.C. Sen. Thom Tillis, along with the rest of the GOP, voted to acquit Trump — paving the way for a future president to violate the Constitution and their duty to our country in order to hold onto power.

Despite Burr upholding his duty and voting in the interests of the people, the state GOP voted Monday to censure the senator for his vote to convict Trump — underscoring the party’s commitment to Trump interests, rather than what is good for the people.

The same Republicans, like Thom Tillis, who spread dangerous lies and denied us the pandemic and economic relief that is so desperately needed, once again put their political self-interest ahead of what’s best for the country —  serving a man who incited right wing militants to murder, terrorize and injure hundreds of Americans.

And while the same Republicans remained loyal to Trump, Sen. Richard Burr properly assumed his role as juror, listened to the overwhelming evidence and, unlike his colleague Thom Tillis and other GOP senators, performed his sworn duty appropriately.

Bottom Line: As stated in an News & Observer editorial, “At a historic moment, Burr served North Carolina, the nation and the Constitution by having the courage to vote his conscience, the highest and finest form of representation”.