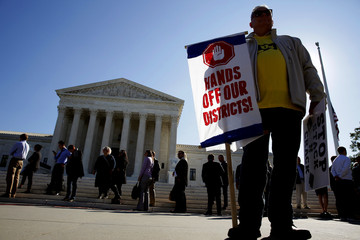 According to a new report from the nonpartisan nonprofit, Represent Us, North Carolina is one of several states at “extreme risk” for political gerrymandering.

In total, the report finds that 35 states have an extreme or high threat of gerrymandering — that’s over 188 million Americans or 70 percent of the nation facing potential voter disenfranchisement due to rigged maps this upcoming election cycle.

The detailed 160 page report provides an analysis of the situation in all 50 states and shines a special spotlight on seven — Florida, Georgia, New York, Pennsylvania, Texas, Wisconsin, and North Carolina.

And while the report lifts up those states that have already addressed the gerrymandering problem through the enactment of state-level legislation, it also points out that the best and most obvious solution (at least when it come to the problem of rigged U.S. House elections) lies with the passage of comprehensive federal reform:

In North Carolina and 18 other states including Texas and Florida, Republicans hold control of redrawing the congressional and legislative districts in these states, which are expected to gain seats after the 2020 census is tabulated.

Historically in North Carolina, Republican lawmakers have repeatedly tried to give themselves unfair political advantages through redrawing districts and enacting suppressive voter laws, including voter ID, to target Black and Brown voters across our state.

Recently, Republicans filed Senate Bill 326, a Jim Crow-era voter suppression bill that includes a strict voter ID requirement — which has been blocked in our state repeatedly due to its blatant racial discriminatory intent, shortens the time period that voters can request absentee ballots and strips funding away from local election administrators.

For years, Republicans have taken advantage of choosing their own voters while denying others their right to equal representation; and, with millions of North Carolinians at risk of being disenfranchised by gerrymandering this cycle, we cannot let Republican lawmakers continue their attack on our constitutional right to vote.

With over 65 percent of North Carolinians agreeing to the end of gerrymandering and implementing automatic voter registration, our state must make strides in implementing pro-voter legislation such as the Fair Maps Act and support the passage of the “For the People Act”, in order to protect all of our voices.

Bottom Line: Gerrymandering is just one of many voter suppression tools that Republican leaders are using to gain a political advantage and silence many within our communities.

Together, we must fight for the protections of our vote and demand the passage of voter rights bills in order to create more fair and representative districts across our state.