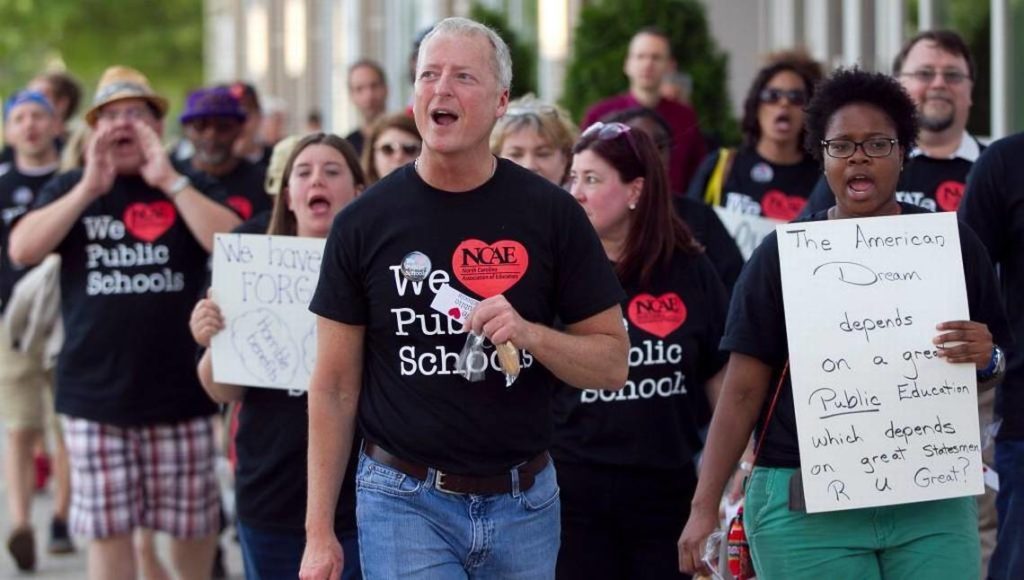 Mark Johnson, the 33-year-old state superintendent who makes $127,000 a year and uses a state-owned car and cell phone, is supposed to be the state’s top advocate for public schools. So you might find it surprising that Johnson has been celebrating for-profit charter schools and private school vouchers while telling North Carolina school teachers they should be happy making $35,000.

Mark Johnson is wreaking havoc on our school system but has the gall to suggest that teachers should be happy on $35,000 per year while using a taxpayer-funded car and cell phone. If he wants to keep his $127,000 taxpayer-funded salary, then he should start doing the job voters elected him for.

RALEIGH
The state’s largest teachers’ group is publicly snubbing state schools Superintendent Mark Johnson, whose support of private school vouchers and whose controversial comments about teacher pay have drawn complaints from some educators.

Mark Jewell, president of the N.C. Association of Educators, announced Friday that Johnson was not invited to the group’s annual convention in March – breaking a 48-year tradition of asking the current superintendent to attend. The announcement came a day after Johnson publicly said the base state starting salary of $35,000 for North Carolina teachers was “good money” and “a lot of money” for people in their mid-20s, especially in rural parts North Carolina.

Jewell said the decision to not invite Johnson was made months ago due to what the group considers the superintendent’s support of policies that are “clearly destructive” to the state’s public schools. But Jewell said the pay comments “devalued” the teaching profession and caused him to want to publicly announce the non-invitation.

Mark Jewell, then the vice president of the N.C. Association of Educators, marches with other educators in Raleigh in 2014 to call on state legislators to raise teacher pay.

“When the $35,000 comment came out, I just had to speak out,” Jewell said in an interview Monday. “I couldn’t have someone who speaks out on so many issues that we oppose.”