From The Greensboro News & Record: Judicial redistricting is another coup by cartography 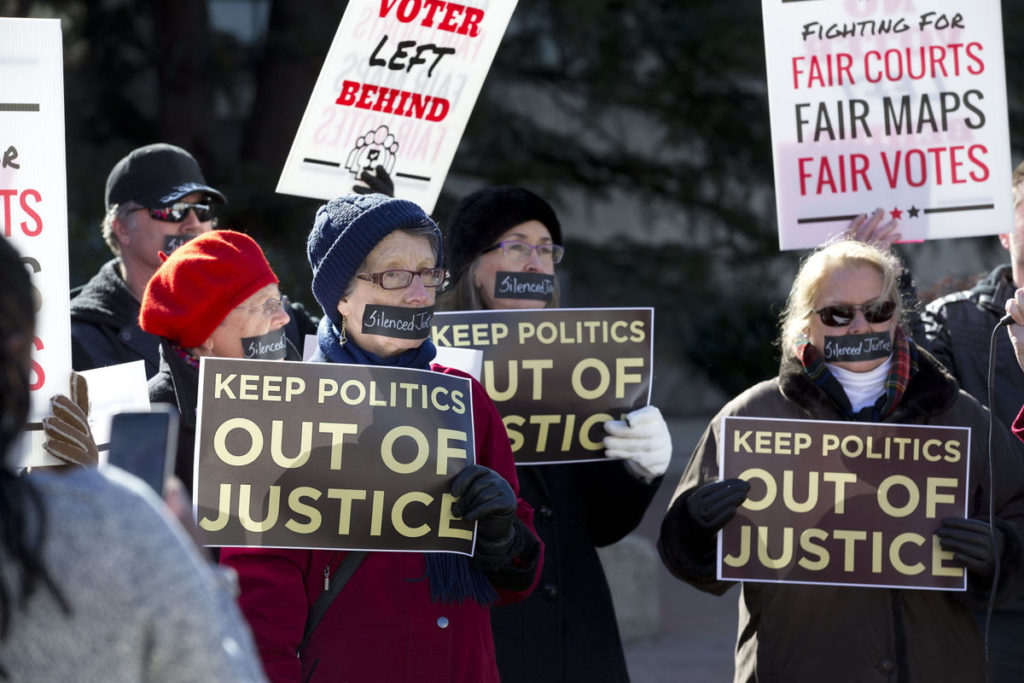 Republicans in Raleigh have inserted party politics into our judicial system by making elections partisan.  Now they present new district maps which are intended to give the GOP power over the courts. These new maps intentionally reduce the number of African American judges in North Carolina and are more of the same extreme partisan gerrymandering that continues to get thrown out in court.  Why do Republicans in North Carolina fear fairly drawn maps?  They know they will lose their power as the people of North Carolina are tired of their extreme agenda.

The latest set of redistricting maps issued last week by the N.C. House judicial reform committee inspired memories from my rock-and-roll past (with apologies to Pete Townshend):

Meet the new maps. Same as the old maps.

There is a depressing predictability to the products issued by GOP mapmakers since 2011. You can count on maps that provide outsized advantages to Republicans and marginalize Democrats to the point of near oblivion.

The terms may change, the lines may shift, but the song remains the same, whether it’s maps for county commissioner, school board, City Council, state legislature or U.S. House.

This redistricting pattern has prevailed during the past seven years in what might be called a coup by cartography. This process enters its final phase with House Bill 717. After reasserting party politics into judicial elections, the General Assembly is now redistricting Superior and District Court judges for partisan advantage.

Like earlier versions of judicial districts created by the GOP-led General Assembly, the latest ones were issued without information on incumbents. That tactic is not an oversight but an effort to mask how significantly these maps favor Republican judges.

Like previous versions of judicial redistricting maps, the latest double-bunks a significant percentage of Democratic and African-American judges, according to N.C. Policy Watch, a progressive news and commentary outlet. Double-bunking, or putting two incumbents in the same district, has been a persistent feature in all three versions of maps Policy Watch has analyzed using public records data.

But given the low percentage of African-American judges overall, that’s still a major impact. Only 18 of 95 Superior Court judges and 53 out of 269 District Court judges are black.

The Southern Coalition for Social Justice notes that the proposed judicial districts are “strikingly similar to districts unanimously invalidated or under continued scrutiny as racial gerrymanders from federal courts,” particularly in Cumberland and Guilford counties. According to its analysis of past election results, Republican judges would be expected to win between 70 percent and 72 percent of Superior Court races and between 69.4 percent and 71 percent of District Court judgeships under the plan released last December.

Lines would have to shift dramatically to alter those percentages by a big enough margin to produce maps with any semblance of fairness.

The disease of gerrymandering that has infected the electoral processes of the state from local to federal levels has consumed some of our most basic constitutional principles.

When gerrymandering allows representatives to stay in power by choosing their constituents, the sovereignty of the people over their government is lost.

When a party uses this tactic to dominate multiple branches of government, its members can change the rules or ignore the customs of government, disrupting the system of checks and balances.

And when partisanship and gerrymandering are injected into the judiciary, there can be no independent and impartial judicial review of corruption and unconstitutional laws.

While the N.C. House pursues judicial gerrymandering, the N.C. Senate wants to take judicial selection completely out of the hands of voters and give it to the ruling political party.

Any party wielding complete power and insulated from the public’s will becomes dictatorial.

There are already so many North Carolina gerrymandering cases being challenged at different levels of the court system that it’s difficult to keep them straight. But no fight is more important than this one.

Voters and the groups that defend democracy must fight like never before to stop this takeover of the courts, both at the ballot box and in the courtrooms where an independent judiciary still resides.

If either plan succeeds, it’s game over for democracy.