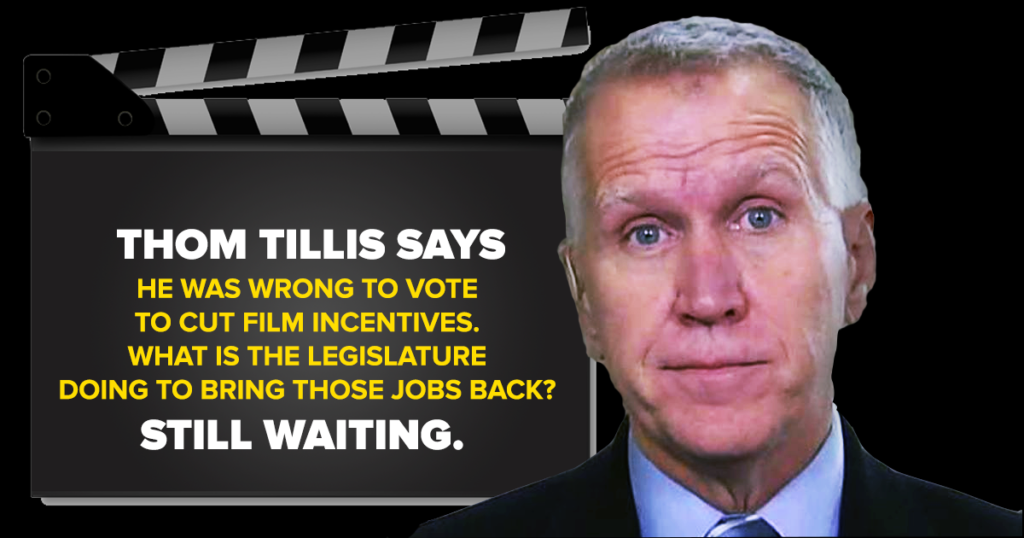 North Carolina’s film industry once supported over 4,000 permanent jobs in our state, but the industry dried up and moved to other states as soon as politicians eliminated the film incentives program in 2013. Now, U.S. Sen. Thom Tillis — who led the charge to destroy the incentives program as Speaker of the House — is finally admitting that the General Assembly messed up.

When an average person messes up their job as much as Thom Tillis did as Speaker of the House, they’re usually sent packing. Tillis, on the other hand, got a promotion to U.S. Senator. North Carolina voters should remember that the next time Tillis comes up for reelection in 2020.

U.S. Sen. Thom Tillis says North Carolina lawmakers made a mistake when they ended film incentives several years ago and replaced them with grants.

Tillis tells WECT -TV that legislators “seriously diminished” the industry’s effect on the coastal economy. He made his comments after a policy round table in Wilmington this week.

As state House speaker, Tillis, a Republican, favored extending the incentives, but the General Assembly ended them.

In the 2017-18 fiscal year, just two film projects have applied and been approved under the state’s grant program. One is a feature film, the other is five commercials for Home Depot.

The state’s new program caps the amount of money a project can receive in grants. Television series can earn $9 million per season while feature films can earn $5 million.