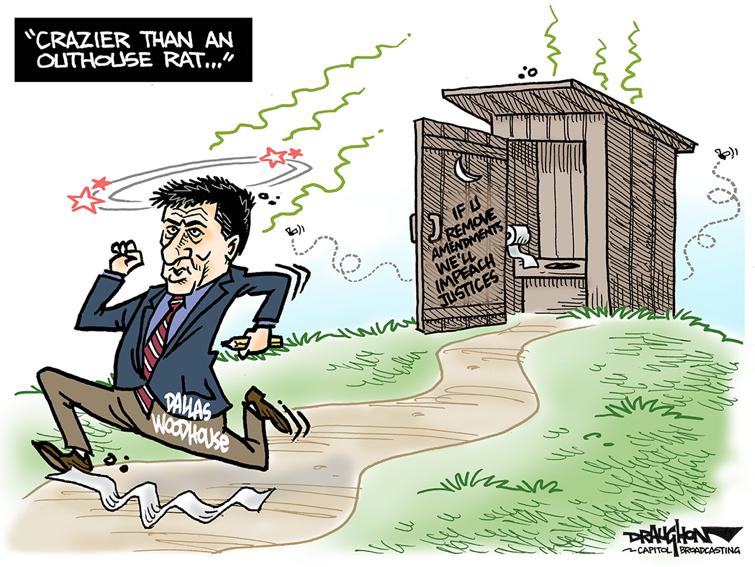 It’s an outrageous bullying tactic. Dallas Woodhouse, executive director of the NCGOP, is threatening to impeach judges who don’t side with him. This is just another attempt to rig the system, this time with straight-up threats. This isn’t how democracy works. Everyone should remember in November how our current lawmakers cheat and bully in order to grab more power.

From The News & Observer

RALEIGH — The state Republican Party executive director raised the possibility that state Supreme Court justices could be impeached if they ruled against legislative leaders in a lawsuit over constitutional amendments.

Dallas Woodhouse made the remarks at an NC Free Enterprise Foundation event Friday. In a later interview with The News & Observer, he said he wasn’t threatening the justices, but is concerned about what would happen if they rule against legislative leaders. “It would be an evisceration of separation of powers,” he said.

Woodhouse’s statements dialed up the tension over the amendments and drew the Supreme Court into the debate before the cases in question even reach the high court.

In a hearing Wednesday, lawyers for Speaker Tim Moore and Senate leader Phil Berger, both Republicans, argued in a lower court hearing that the courts have no role in determining how proposed amendments appear on the ballot.

On Twitter, Woodhouse wrote “Should democrats on the Supreme Court block the people’s right to vote, we will have a constitutional crisis.”

The state Supreme Court has four Democrats and three Republicans.

In an interview, state Democratic Party Chairman Wayne Goodwin said the suggestion that justices would be impeached over a court ruling “is offensive and wrong and improper” and violates “everything we believe in.”

Goodwin and Woodhouse appeared together on the Free Enterprise Foundation panel. Goodwin said he told the audience after Woodhouse spoke that it had just heard Woodhouse threaten impeachment of Supreme Court justices or Court of Appeals judges over pending court cases.

“Threatening or intimidating or expressing potential retaliation for our justices and judges is offensive,” Goodwin said in an interview with The N&O Friday afternoon.

“The deliberations are still happening on this topic,” he said. “It is a matter that is pending. To suggest that the legislative branch will consider impeachment of the judicial branch, in my book, is a threat.”

Moore and Berger should say publicly whether they’ve considered impeachment as a way to control the judiciary, Goodwin said.

“I believe Democrats, Republicans, North Carolinians — all of us — need to know if North Carolina legislative leaders have discussed this,” Goodwin said. “Is this another card up their sleeve to try to tinker and tamper with our election laws?”