The Salisbury Post: So far, scheme to transform judicial branch has failed 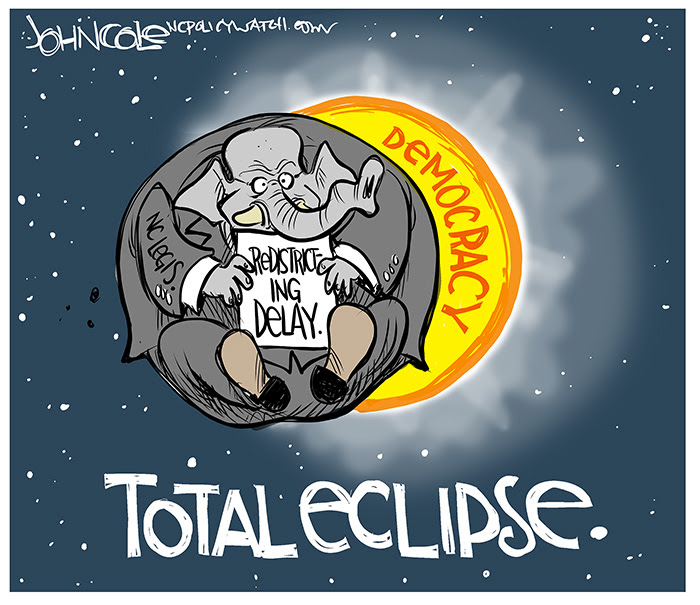 The judicial appointments amendment is nothing more than a power play by this legislature to further strip the powers of our governor. Over the last 10 years, NC’s Republican-controlled legislature has had law after law struck down by the courts for being unconstitutional. They are now retaliating by trying to take control of the courts. This amendment will strip yet more power from the governor and give it to the legislature. It will remove the important checks and balances that make our democracy work. Voters in North Carolina should vote against this blatant power grab.

Our state constitution has a provision that judges be elected by the voters. It is pretty well accepted that voters don’t have a clue who they are voting for when it comes to judges but don’t want to give up their right to make those choices. So how does the legislature get people to select better judges — that is to say, Republican judges?

The real problems occur with the appellate courts overturning their legislation, so lawmakers focused on protecting those Republicans already at those levels.

In 2015 there was only one Supreme Court justice seeking another eight-year term. You’re getting ahead of me here, aren’t you? Yup, that justice was a Republican. So, the legislature passed a law that after reaching the highest court, Supreme Court Justices could stand for a “yes-no” retention vote instead of having to face an actual opponent. The Supreme Court wasn’t amused and struck down the notion as unconstitutional. The affair backfired because voters were astute enough to recognize chicanery when they saw it and elected a Democrat, giving that party a plurality on the highest court.

The “elect Republican judges movement” wasn’t off to a great start. Perhaps, legislators concluded, they were reaching too high and decided to get back to basics. Surely voters would gleefully elect Republicans to the bench if they just knew their party affiliation, so they passed a law requiring that judicial elections become partisan contests, with candidates required to show their party registration on the ballot.

Legislators were further stymied by a move to redraw prosecutorial districts. Not only did they not accomplish this goal, but the delay ended up eliminating this year’s judicial primaries. In the process two Republicans (one an incumbent) registered to run for the Supreme Court and there is a good chance a split Republican vote will assure another Democrat on the highest court.

Undeterred, legislators determined to change the judicial vacancy selection process, which had the added benefit of further reducing the powers of our governor. Currently the governor appoints someone whenever there is a district court vacancy, a process that has worked well for many years. Since the current executive is a Democrat, lawmakers felt compelled to play “gotcha” politics while also having a major role in choosing who should fill judicial vacancies by proposing a constitutional amendment.

Former Gov. Jim Martin explained this amendment best by saying that lawmakers are trying to put unconstitutional things in the state constitution so as to make them not unconstitutional anymore. If you had trouble understanding that, you should try reading the language for the proposed amendment. It is confusing and deceptive.