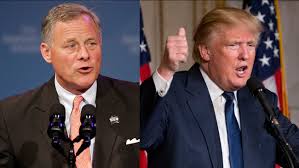 RALEIGH – Sen. Richard Burr has apparently decided to stick his head in the sand when it comes to investigating the Trump campaign’s collusion with Russia during the 2016 election, despite Burr’s position as chairman of the Senate Intelligence Committee.

Burr this week declared he has seen no evidence of collusion between Trump and Russia leading up to the 2016 election, while Burr’s committee has yet to interview key members of Trump’s campaign team who have been convicted or pleaded guilty to crimes exposed by the ongoing investigation of Special Counsel Robert Mueller.

“Senator Burr’s conclusion of no collusion is like the Keystone Cops claiming the case is closed with nothing to see while the local jail is chockablock with convicted criminals whose fingerprints are all over the crime scene,” said Gerrick Brenner of Progress NC Action.