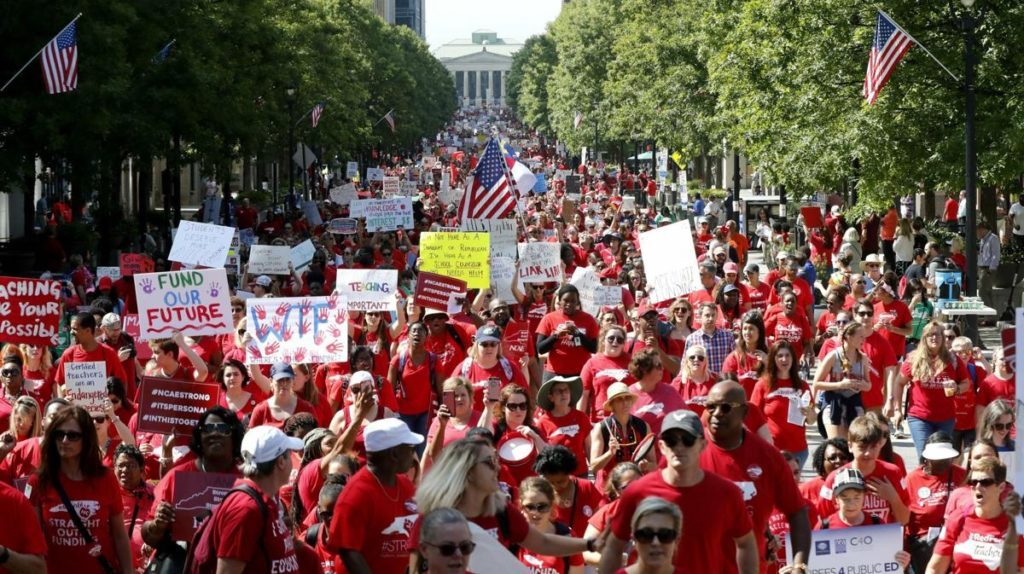 House leaders misled tens of thousands of educators about their raises, which would not take effect until halfway through the next school year

“How convenient that House Speaker Tim Moore and GOP House members of the NC House forgot to mention that their proposed teacher raises would not take effect until next year, and would not help teachers with fewer than 16 years of experience at all,” said Gerrick Brenner, executive director of Progress NC Action. Republican lawmakers never mentioned these key details during their Tuesday afternoon press conference, just a day before thousands of educators descended on the state legislature to demand better funding for public schools.

“This is yet another bait-and-switch budget proposal from politicians who claim to support North Carolina’s public schools, even as they continue to undermine our education system. When you favor tax cuts for the wealthy over full funding for public schools, it’s hard to be upfront and honest with the public when you know the public does not share your priorities.”

GOP deception is familiar to their state budget press conferences. In 2015, legislative Republicans touted a proposed 4% pay increase for teachers — but conveniently forgot to mention that their proposal would have fired 8,500 teacher assistants in the largest layoff in state history. Then in 2014, Sen. Phil Berger boldly claimed that teachers were getting “the largest pay raise in North Carolina history” under his plan. That turned out to be completely false.

“Instead of listening to educators on May 1 and releasing a budget which truly values public schools, the politicians in Raleigh are trying to ban future teacher marches,” added Brenner. “House Republicans are hiding details on their state budget because they know the public will not like the details of their state budget. It’s really that simple.”