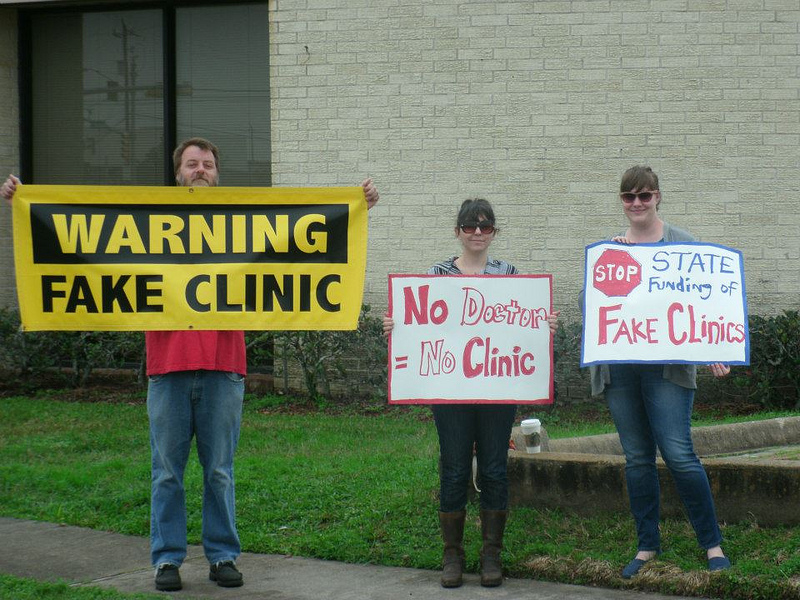 The Anti-abortion group that runs the dubious “Crisis Pregnancy Centers” in North Carolina used tens of thousands of dollars on the printing of illegal religious rhetoric pamphlets.  Instead of receiving any consequences for their unconstitutional actions the Republican-led General Assembly wants to give them $400K more in funds.

But even as the North Carolina Department of Health and Human Services (DHHS) confirmed the anti-choice Carolina Pregnancy Care Fellowship (CPCF) had misspent public money—to the tune of $50,000—on sectarian content in violation of federal law, the agency continued to allow the use of federal funds for some religious materials, Rewire.News found. Documents obtained through a public records request revealed the state approved materials that encouraged parents to pray with their children, told men whose partners have had abortions to “handle your personal guilt before God,” and exhorted women to embrace the “blessing” of marriage as “a sacred institution created by God in the Garden of Eden.”

The records provide a window into the monthslong scramble by state officials to determine how much federal block grant money—intended to address maternal and infant mortality in a state with some of the worst outcomes in the country—CPCF had misused on Bible study courses and other religious materials. After it concluded in late 2018 that CPCF had misspent approximately $50,000 in public funding over five years, DHHS never informed the state legislature. Amid a budget battle between the Republican-led legislature and Democratic Gov. Roy Cooper, lawmakers are poised to give more than a dozen anti-choice fake clinics a record amount of at least $2.64 million in state funds this year. Many of those clinics are under the CPCF umbrella.

Following six years of federal block grant funding, CPCF is set to see that money cut off; instead, legislators’ most recent budget designates $400,000 for it annually in state funds, which come with fewer requirements. (Bobbie Meyer, state director of CPCF, which now goes by LIFElink Carolina, called the shift a “mutual decision” with the legislature.) The budget also gives CPCF permission to spend money left over from the 2019 fiscal year, when DHHS confirmed the group spent only $600,000 of its $1 million in state funds. By far the biggest winner in the budget is the Texas-based Human Coalition, which is set to see its funding quadruple to $1.2 million a year, even though documents show it has failed to meet basic reporting requirements over the past two years. In fact, records obtained by Rewire.News show the group was so uncommunicative about how it used a $300,000 state grant in the 2018 fiscal year that CPCF, which was supposed to administer the grant, asked the state to intervene and take over the contract for 2019. When the sparse reporting continued, DHHS wrote in a report to lawmakers this April that Human Coalition “has not provided all of the required information for the full and timely completion of this report,” and the group’s model “cannot be identified as evidence-based or even a best practice.”