A math teacher does the math on NC teacher pay 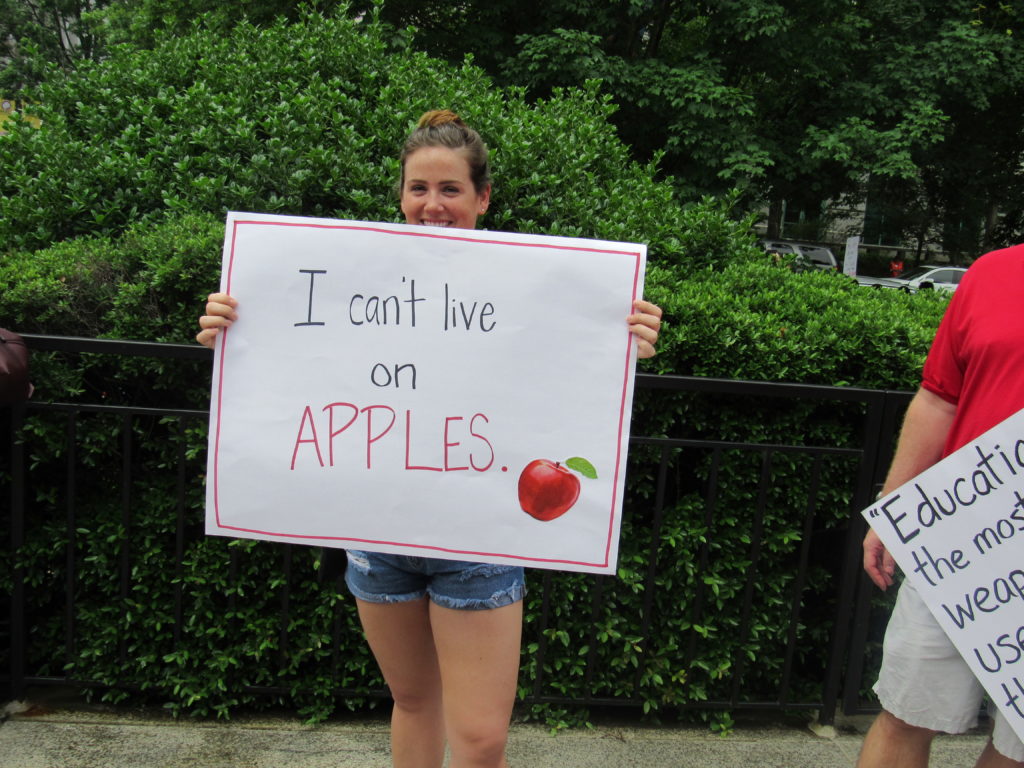 From The News & Observer

$66,267. No, that is definitely not my salary as a teacher. It’s the total amount I have “lost” from the state thanks to a decade of pay freezes, the loss of longevity pay, and the step increases that were stolen from teachers in 2012.

When you adjust for inflation and enrollment, public school funding in North Carolina is still less than it was a decade ago — and nowhere is that more apparent than our salaries. Unfortunately, Republican leaders in the General Assembly would rather give more tax cuts to big corporations instead of restoring the educating funding we’ve lost since the recession began.

In 2002, I left a Ph.D. unfinished to teach full-time in Wake County at a starting monthly salary of $3,874. Luckily, I had some college-level teaching experience which bumped my starting salary higher than that of the typical first-year teacher. But then, how many first-year teachers also have three school-age children at home and another in college?

In 2007, I earned a substantial pay bump by passing my National Boards. My twin daughters headed to college the following year to join their older sister, right around the time the legislature froze our pay during the recession. Thanks to the politicians in Raleigh, my daughters graduated from college before I ever saw another pay increase!

But when lawmakers eliminated longevity pay for veteran educators in 2012, I actually took a pay cut of $101 per month — and my salary has been behind the curve ever since. As a master’s level, board-certified teacher with 24 years of experience, I am losing $872 a month in salary because of the step increases and longevity pay which lawmakers cut in 2012-2013.

In fact, right now I’m still being paid as a year-23 teacher because lawmakers failed to provide funding for educators and other education employees before they adjourned for the year. How many of you can afford to give up nearly $900 a month? Is it any wonder that North Carolina teachers supported Gov. Cooper’s veto of the GOP’s bad-faith budget? The 8.5% pay raise over two years which Gov. Cooper proposed in his compromise budget would go a long way toward making up for the long-term salary deficits which 80,000 teachers just like me are experiencing.

The General Assembly’s weak commitment to public schools puts a constant strain on educators. Because per-student funding for classroom materials is even less than it was a decade ago, I purchase all the supplies for my classroom out of my own pocket — working a second job to do so throughout the year. My student load has gone up from 125 students to 196 students this year as a high school math teacher. If I am not tutoring students after school, I am usually grading papers. There is no funding this year to support our amazing high school math team — typically the top team in the state — which means there are no extracurricular practices for the team in preparation for the State Math Meet or for the national meet in June.

In 18 months, I’ll be eligible to retire from teaching and leave public education for a more lucrative field — maybe even finish that Ph.D. in statistics. But where is the teacher who will replace me? Just last week, my oldest granddaughter told her mother that she wants to be a math teacher like her grandma. I hate to say it, but I’ll do my very best to push this brilliant child down another pathway. Unfortunately, the current teaching environment in North Carolina is not something I want for any of my grandchildren. I hope all parents concerned about their children’s education will take note.