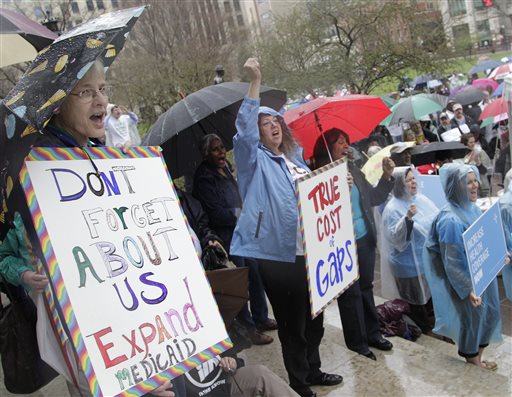 The North Carolina General Assembly convenes on Tuesday for a so-called “mini-session” amidst the budget standoff waged by legislative Republicans since last summer. Meanwhile, the health care spotlight is heating up on North Carolina Republicans as yet another red state — this time Kansas — has decided to expand Medicaid.

Kansas is king when it comes to conservative state funding. In recent years, it gained national attention by going on the fiscal equivalent of a hunger strike. It cut taxes to the bone and waited for the economy to boom. Instead the state languished and even Republican lawmakers backed raising taxes.

Now penny-pinching Kansas sees the obvious value of expanding Medicaid under the Affordable Care Act. The federal government will pay 90 percent of the cost, rural hospitals will be able to stay afloat, health care-related jobs will be created and 150,000 low-income people will become newly eligible for health insurance.

Should the deal reached by Kansas’ Democratic governor and Republicans who control the Legislature go through, Kansas will be the 37th state to expand Medicaid. This fall, voters in Oklahoma and Missouri may vote on initiatives to expand.

It’s getting lonely for North Carolina as it huddles with a cluster of Deep South states in continuing to say no. Arguably, North Carolina is paying the biggest price for holding out. The impasse over expansion — Democratic Gov. Roy Cooper wants it, Republican legislative leaders don’t — has led to a standoff over approving the state budget. Teacher raises and a slew of other state funding increases are on hold as a result.

The General Assembly’s Republican leaders say they oppose expanding Medicaid because it will increase state spending and the federal government could renege on paying 90 percent of the cost. Both reasons are hollow. The Kansas proposal, like expansion laws in other states, allows for the state to cut back on its Medicaid expansion funding if the federal government reduces its share. Meanwhile, Kansas hospitals — not the state budget — will pick up the cost of the state’s 10 percent share. In North Carolina, Cooper has proposed the same arrangement.

North Carolina’s expansion opponents aren’t really driven by finances. Theirs is an ideological objection. They don’t want “able bodied” people without dependents getting what they consider free insurance. But leaving hundreds of thousands of working poor people uninsured isn’t only callous, it’s expensive for everyone. Hospitals pass the cost of caring for the uninsured to the insured. And in rural hospitals, where many patients are uninsured, the lack of Medicaid expansion dollars leaves them unable to stay open.

Some Republican North Carolina lawmakers wish their state could do what Kansas has done. In September 2019, the House Health Committee passed a Medicaid expansion bill that included work requirements and a small premium, but there was no vote on the bill before the session closed at the end of October. Now the lack of action on expansion will be a burden for Republicans in the November election.

Kansas has shown North Carolina the folly of excessive tax cuts. Now it has shown the wisdom of changing one’s mind in the face of overwhelming facts. Kansas finally moved to expand after Jim Denning, the Republican leader in the Kansas Senate, found common ground with Gov. Laura Kelly, a Democrat. His comment on the agreement should echo loudly in North Carolina.

“It’s a lot easier to get to no than it is to get to yes,” he said, “but this is what governing looks like.”

Bottom Line: In 2020, North Carolina educators and supporters of public schools need to demand that state lawmakers make meaningful investments in public schools instead of playing politics with teachers’ livelihoods.