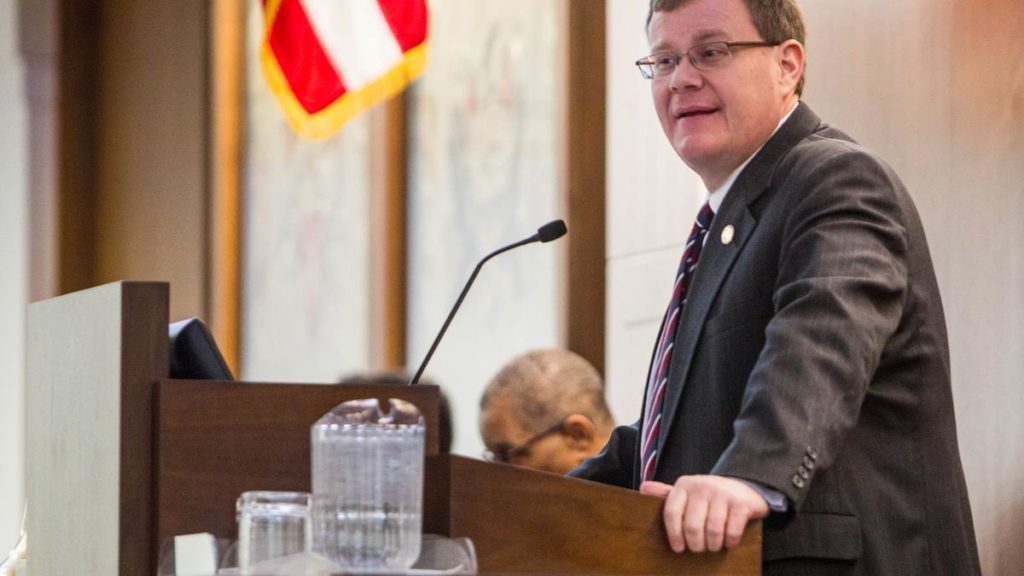 The two board members, who remain anonymous, told NC Policy Watch about discussions among members of the UNC Board of Governors about Moore’s candidacy.

On Monday, East Carolina University Board of Trustees member, Robert Moore, who was censured after his involvement in a student government election scandal earlier this month, first mentioned Tim Moore’s interest in his resignation letter.

As reported by NC Policy Watch, Moore sent a resignation letter to N.C. House Speaker Tim Moore, that called out the speaker’s pursuit for the ECU chancellor position.

“He is interested, he is pursuing it and there’s a lot of conversation about it,” one of the board members said in an interview with Policy Watch.

Policy Watch agreed not to identify the trustees, so they could discuss confidential conversations amongst board members and the confidential chancellor search process.

These members described conversations about Moore’s candidacy in which they directly participated. These conversations included debates about whether it would appear proper for one of the state’s most powerful elected officials, responsible for appointing members of both the Board of Trustees and the UNC Board of Governors, to take a job on which those boards would ultimately vote.

There has also been discussion among members of the UNC Board of Governors about Moore’s candidacy for the top post at the Greenville university, three members of the board confirmed to Policy Watch this week. Policy Watch agreed not to identify those members so that they could describe confidential conversations and because they said they feared political reprisal for discussing Moore’s interest in the chancellorship at ECU.

“It is a continuing issue we have had to deal with,” one Board of Governors member told Policy Watch. “He is obviously interested in a leadership position, and we are going to have to deal with the question of what that means and whether it’s appropriate.”

One Greenville trustee said Moore’s apparent interest in the chancellorship puts the recent leadership changes at ECU in a new light.

Cecil Staton, the last ECU chancellor hired on a permanent basis, was forced to resign by the UNC Board of Governors last May and no reason was ever publicly given. Staton’s interim replacement, Dan Gerlach, resigned the position after it was alleged he’d engaged in an evening of drinking with students in bars near campus. A security video showed him driving off afterwards.

As revealed in a UNC investigation of the Gerlach affair, several figures close to the scandal suggested Speaker Moore’s office was involved in attempts to make damning photos and video of Gerlach publicly available.

“It is not an accident that Tim Moore has had his hand in every one of these major leadership changes at ECU,” one trustee told Policy Watch this week. “He wanted to be the UNC President and it became clear to him that would be too controversial and there were some members of the [UNC Board of Governors] who would not go for that. So he began looking at where he could be a chancellor and ECU looked like the best place.”

Another member said it is clear that some leadership role within the UNC system is Moore’s “gold parachute plan” should Democrats take control of the House and he finds himself out of the majority.

“Cecil Staton was making $450,000 a year as chancellor at ECU and we paid him almost $600,000 in a separation deal when he was forced out,” said a Board of Governors member. “If you are a state legislator, even if you’re the Speaker, that looks like pretty good money. That’s not a bad way to retire from Raleigh.”

Tim Moore’s interest in the ECU chancellor’s position confirms the public’s perception that the board has become too partisan and too closely tied to the General Assembly.

If approved, instead of honest leadership, the UNC BOG and ECU Board of Trustees will have confirmed that favoritism is more important than the interests of the North Carolina universities and its students.

Any move to entrust House Speaker Tim Moore with the chancellor position at ECU should be considered inappropriate because it politicizes the chancellor’s role and negatively affects decisions being made in the university’s interest. UNC BOG should uphold its duty and select someone who puts the interests of the students and the university first.