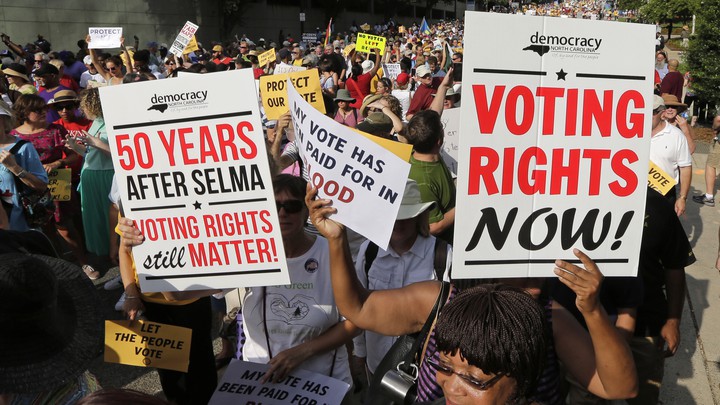 On Tuesday, a North Carolina Court of Appeals blocked the NC voter photo ID law, saying that the law was passed with discriminatory intent and will cause irreparable harm.

A federal court has already blocked the voter ID mandate until the 2020 primary, but the state courts ruling could extend the blockage until the general election in November.

This is now the second court that has ruled that the voter ID law, written and passed by the Republican-led legislature, could harm African-American voters.

The judges issued what’s called a preliminary injunction, which is not a permanent ban on voter ID. It simply blocks the law from going into effect while the lawsuit is still underway. So if the case is still in the courts in November — which is entirely possible — then voters won’t have to show ID then, either.

Based on the evidence they’ve seen so far, the three judges who heard the case wrote, it appears the legislature will lose in its defense of the law. At one point in their ruling, the judges summarize a major part of the GOP defense and then add that those arguments “fundamentally miss the point.”

The activists who sued appear likely to be able to prove “that discriminatory intent was a motivating factor behind” the voter ID law, the judges wrote.

“Today, the state Court of Appeals has chosen to unanimously side with democracy,” said Wayne Goodwin, chairman of the N.C. Democratic Party, in a press release. “This Republican legislature has repeatedly targeted African Americans with surgical precision to keep them from making their voices heard.”

“We need to make it easier to vote — not harder,” he added.

For years, the Republican legislature has used the voter ID law as their attempt to suppress the people’s vote.

The 2013  “monster voter suppression” bill coupled with extreme partisan and racial gerrymandering, ensured the GOP’s political survival as democratic and minority voters were manipulated and suppressed.

But as more courts rule in favor of a fair democratic process, these discriminatory practices will no longer diminish the power of voters and their voices.