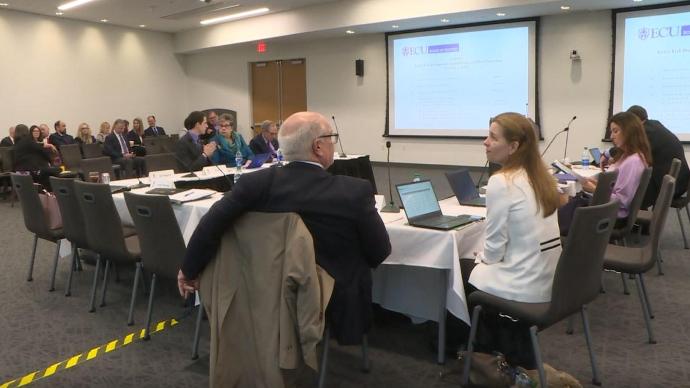 One member of the East Carolina University Board of Trustees abruptly resigned and another was censured during a hearing before the UNC Board of Governors last Friday.

ECU Trustees Phil Lewis and Robert Moore were brought before the BOG after evidence revealed the two members offered money for an ECU student to run for SGA president. The two members told the student they could provide finances for her campaign as long as she kept the source of the money a secret.

Both members, who were appointed to the ECU trustees by the state legislature, sought out the student in order to help create a majority vote to advance certain objectives, including electing a new board chair.

Phil Lewis, who had been appointed to the ECU Board of Trustees by the UNC System Board of Governors, offered his resignation. It was accepted effective immediately.

The UNC board voted to censure ECU trustee Robert Moore. It was the strongest action the board could take against Moore because he was appointed to the ECU trustees by the state legislature. The legislature would have to decide to remove him.

“I’m incredibly disappointed,” Board of Governors Chairman Randy Ramsey said during a specially called meeting Friday to address the turmoil among the ECU trustees. “Personally, if I could remove the entire board today, I probably would.”

Ramsey expressed frustration that he and some other UNC board members felt at having to repeatedly address the personal sniping by members of East Carolina University’s governing body.

Ramsey said the Board of Governors would ensure that ECU’s board finds a way to work together on behalf of students, faculty, parents and taxpayers “if we have to replace every single trustee on there.”

The efforts by Moore and Lewis to influence a student government election and offer money for board votes is a clear violation of ethics and their leadership should be questioned.

In the end, ECU should be recognized for its programs and quality education but instead has emerged as the face of mismanagement plaguing NC’s higher education. The incompetence of the UNC BOG, who oversees the ECU Board, has added onto the portrait of dysfunction.

Actions of both the UNC BOG and the ECU Board of Trustees have marred the image of the policy-making body. It may be time for the state legislature to stop picking friends to fill these roles and start choosing individuals who will put the interests of the North Carolina universities and its students first.