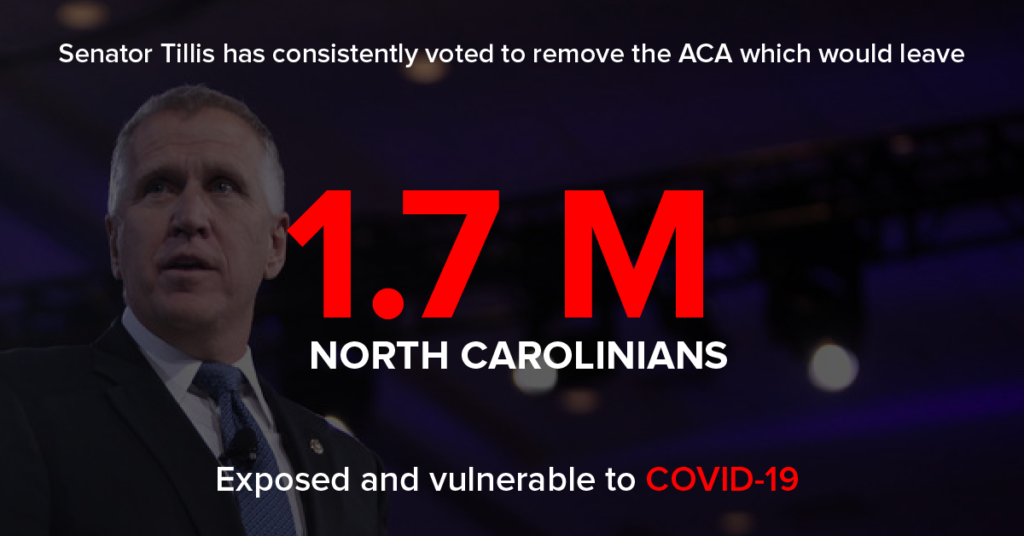 A few weeks ago in an opinion editorial by U.S. Sen. Thom Tillis, Tillis claimed that he will remain committed to,“my work of listening to the concerns, opinions, and experiences of North Carolinians”. But since 2014, the senator yet has demonstrated a pattern of dodging voters’ concerns during his town halls and in his decisions.

The policies Tillis has supported since coming into office have very little to do with him hearing “the stories of financial hardship many North Carolinians are facing”, but rather his own special interests.

Hosting dozens of telephone town halls might look good in a reelection campaign ad, but a closer look exposes a suspicious absence across all of these meetings: any and all criticism of Senator Tillis.

In 2017, for example, after facing criticism from voters for his lack of open town halls, Tillis said he took issue with “shouting” voters (who were angry and afraid of losing their health care). Now, a socially distant format allows the Senator to pick and choose which questions to take, eliminating anything he doesn’t like — and that means many voters’ questions and concerns are simply going unheard and unanswered.

Tillis has opposed raising the federal minimum wage while it languishes at $7.25 an hour here in North Carolina. This has prevented many of us from being able to cover basic expenses, let alone save for emergencies like the one we’re in now.

Universal or expanded access to affordable healthcare would have insulated working families from enormous health care costs in the wake of the pandemic and prevented laid off workers from losing employer-linked healthcare — but our senator has voted repeatedly to repeal the Affordable Care Act, cut the budgets of Medicare and Medicaid and block Medicaid expansion in the states.

Despite ACA expanding Medicaid in 37 states and lowering healthcare costs for Americans, Tillis has voted to remove ACA several times since its passage — a move that would have left 1.7 million North Carolinians vulnerable.

In 2017, Tillis voted for Trump’s tax law that gave over $8 billion in tax cuts to drug corporations, despite their price-gouging on patients.

During Tillis’ time as Speaker of the NC House, Tillis slashed unemployment insurance that resulted in North Carolina being among the lowest-paying states for unemployment benefits.

The decisions made by Tillis over the years are impacting North Carolinians who have been left vulnerable due to the financial and public health crisis COVID-19 has imposed. Tills’ deliberate removal of the state’s capabilities to deliver meaningful aid to jobless persons and to stabilize the economy, while also pushing for a loss of health care coverage for millions reveals his shortfalls as a leader to North Carolinians.

Bottom Line: If Tillis truly cared about North Carolinians, he should start listening to his constituents and commit to protecting us, not his wallet.